How to recognize parental burnout 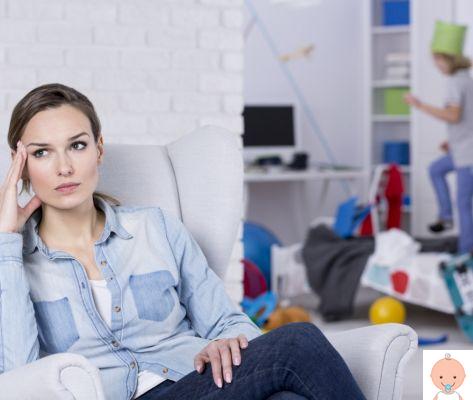 The Bernout is termed a exhaustion syndrome psychological and emotional resources in which the subject experiences phases of depersonalization and derealization in the context of work activities that concern helping relationships. Most affected are doctors, nurses, OSS, traffic police, teachers, social workers, etc. For several years, however, it has also been talked about in the family and specifically in reference to the parental role.

What are the main symptoms that allow us to recognize parental Bernout?

In reference to conditions of severe stress the organism is able to defend itself by gradually adapting to the pressing demands of the environment but, once the resources run out after the alarm and resistance phase, enters the phase of exhaustion. Then a stage of emotional fatigue, depression, apathy and disinterest such as to determine an emotional detachment from what happens around and in particular from the children, becoming colder and less participatory towards them.

Read also: How to behave if the father is cold towards his children

There does not seem to be a substantial difference between men and women, even if the latter are slightly prevalent, therefore we speak of parental Bernout as it affects both parents.

While in the workplace we talk about depersonalisation, in parental Bernout a condition of emotional distancing is manifested for which the father or the mother they are no longer interested in the condition of the children since they are no longer able to feel empathy since the burden of responsibility weighs too heavily. The phase of exhaustion produces an emotional state of depression precisely because the resources available to the subject have run out due to the excessive responsibility of the role. A chronic fatigue that has not received adequate support to be able to deal with the situation adequately therefore takes over.

Mina is a mother of two children. The second is a teenager. For some time now the woman has begun to feel a strong fatigue deriving from the separation from her husband and subsequently from the continuous quarrels with her teenage son that she does not respect the rules, she does not want to go to school and seems to continually seek attention. She is mostly alone following her two children since her ex-husband travels continuously for work, which is the reason for their estrangement. She feels the weight of the circumstances that weigh upon him and she cannot get excited at all so much that she feels a form of emotional distance towards her children. She is tired and unmotivated, she would like to rest and be able to devote herself to her family with more involvement but she cannot. She therefore asks for help because she is convinced that she will no longer cope with her, her only strength.

What can be done?

Time management is a first way to respond to stress. The latter, in fact, leads to a difficulty in carving out spaces to dedicate to oneself and therefore the attention is mainly focused on the various problems and commitments to be solved. Instead, it is important to dedicate time to things you like for yourself despite the complexity of the situation and the onset of any feelings of guilt. The responsibility for one's own health is prioritized over all the rest also by virtue of other people, otherwise one could not dedicate oneself to them. Requesting support is also a possible resource. You can start talking to a friend, a relative to bring out your own experience. The reluctance to talk about it is often linked to the shame of not being adequate as a parent and as an adult, but each individual has specific personality characteristics and therefore can be more or less subject to intolerant stress conditions. Therefore consider asking for help, perhaps by consulting a psychotherapist, it could be a way to try to rearrange your life.

How to recognize a miscarriage: the symptoms ❯

add a comment of How to recognize parental burnout