How to sleep in pregnancy: positions and advice 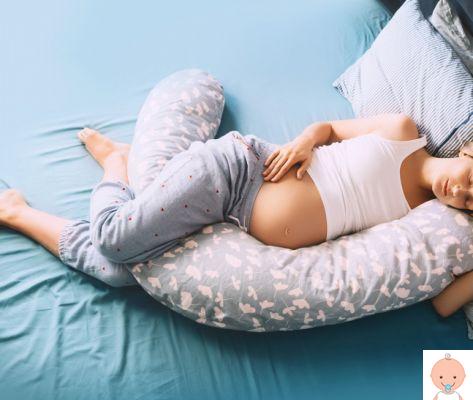 Il sonno during pregnancy it can become a bit difficult at some point in gestation. If in the first few weeks you can feel a lot sleepy and you would want to sleep all the time, as the months go by the increase in volume of the belly, the action of hormones, the increase in progesterone, the frequent urge to have to urinary even at night and restless legs syndrome can contribute to making sleep really difficult. So, how to sleep in pregnancy?

Tips for sleeping well during pregnancy

One of the most annoying advice you will receive during pregnancy is: "Sleep and rest as long as you can." Was it easy! The combination of hormone overload, a constant urge to urinate, pre-maternity nervousness and a heavier belly can make even those who have never been sleepless. Also movements of the child that are accentuated just when the mother is at rest can make sleep less simple and make you spend many hours in white.

How can this problem be solved? Here are some suggestions

Since your baby needs a lot of water, it is essential to drink a lot to stay hydrated during pregnancy, but when he grows and pushes against the bladder, drinking a ton of water in the evening means having to get up and pee just as you are. to fall asleep. To avoid this, it would be good to stock up on fluids especially in the morning and afternoon, drink only when you are thirsty at night to prevent dehydration. 10-20 Kegel exercises every day will also help you to strengthen the bladder walls, so you don't have to pee so often.

As you know, between hormones and physical changes, pregnancy can make you really tired during the day, especially during the first and third trimester of pregnancy. It's okay to take a nap but for no more than 40 minutes, getting more sleep would shift your internal biological clock, making it difficult and even impossible to fall asleep at night. If you feel sleepy after 16.00pm, skip the nap entirely but go to sleep early in the evening

Medical research shows that the brain can confuse the artificial light of these technological devices by mistaking it for "daylight" and, consequently, cannot release melatonin, which is normally activated by dark at nightfall. In addition, computers and television are mentally stimulating, they can trigger stress and make you 'think too much'.

Try a pre-bed ritual that helps your mind and body relax. One of the best ideas is to take a hot bath or shower, after being in the water, your body temperature drops, imitating what happens when you fall asleep. Stretching, yoga, and deep breathing exercises will work as well. It is therefore important to create a sleep routine (which you will also need when you have to do the same for the baby): try to go to sleep always at the same time, avoid violent movies before bed, create a comfortable and relaxing environment and go to bed as soon as the first signs of sleep arise.

No caffeine after 13pm

Research shows that up to 200 milligrams of caffeine per day - about one and a half cups of coffee or three to four cups of tea - can also be consumed during pregnancy. But in pregnant women, caffeine remains in circulation for longer, so it should not be taken after 13.00.

Instead of a heavy dinner, which can lead to disruption of sleep and digestive pain, opt for a light dinner followed by a targeted nighttime snack. For the snack, choose something between 150-200 calories that contains carbohydrates and proteins, such as cottage cheese and fruit, wholemeal crackers and cheese or hummus with chopped vegetables, and have this small meal about half an hour to an hour before. to go to bed.

Nutrition is certainly of great importance in promoting sleep at night. Some foods have the power to promote sleep and you shouldn't get heavy, especially in the evening. Better, therefore, to think of one light dinner and easily digestible based on vegetables, fish, wholemeal bread (because complex carbohydrates promote the release of serotonin which improves mood and helps sleep); limit the consumption of coffee, to drink possibly only in the morning, and of beverages based on caffeine. The consumption of spicy foods, tomatoes and all those foods that can promote the onset ofgastric acidity, another disorder particularly frequent in pregnant women.

There is nothing worse than waking up at 2 am with a painful cramp. For many women, a magnesium supplement - about 300 milligrams a few hours before bedtime - can help, since low magnesium levels can contribute to muscle tension and spasms. Here, too, a warm bath before bed along with stretching can help by relaxing the leg muscles

Get out of bed

It may sound absurd, but staying in bed when you can't sleep can actually make insomnia worse, so if you can't sleep, get out of bed and do something relaxing, like reading or meditating, for 15 minutes. So try to get back under the covers

Get rid of reflux

Heartburn is one of the most common ailments of pregnant women and, unfortunately, it can occur as early as the first trimester. Not only can it cause pain, of course, but chronic reflux irritates the throat and can cause a chronic cough, so we understand that sleep would also be affected. To reduce the chances of developing reflux, do not lie in bed at night, but lean your back on some pillows, rolled towels that you can also put under the mattress so that you are tilted at least 30 degrees.

As we said, it's best to avoid acidic foods like tomatoes, citrus fruits, caffeine and chocolate, especially four hours or so before bed. If that doesn't work, contact your doctor for a prescription for a suitable medication.

And if towards the end of the pregnancy it feels particularly merit it is good to run for cover. The time of delivery is approaching and this thought can cause thoughts and a little agitation that can also affect the quality of sleep. Better ask your gynecologist if it is possible to take one tisane relaxing.

Pre-maternity nervousness or worries about work are keeping you awake and you can't stand it anymore? Contrary to popular belief, there are medications you can take during pregnancy to help you fall asleep on restless nights. Remember: you need to get permission from your pregnant doctor before taking any medication

Read also: Back pain in pregnancy

How to sleep well in pregnancy - Video

Sara Zanoni, midwife at the "La lunanuova" center in the city, explains in this video tutorial all the secrets for sleeping well during pregnancy.

Positions for good sleep in pregnancy

When the baby bump becomes very bulky it can be difficult to find a comfortable position to sleep. There best location in the last months of pregnancy it is the one on the left side with the legs slightly bent, in this way the blood flow is facilitated and the baby is left free to move. Some items can be useful for finding a more comfortable position. For example you can put a pillow between the knees to relieve tension in the thighs and pubis.

Sleeping on your stomach during pregnancy

Sleeping on your stomach may be possible in the first months of gestation, and don't be afraid because it doesn't hurt the baby. But at some point it will become really impossible. As your belly grows, it will become more comfortable to sleep on your side, perhaps placing a pillow between your legs and one behind your back to find a comfortable and relaxed position.

Sleeping on your stomach during pregnancy

Is it comfortable to sleep on your stomach?

At the beginning of pregnancy, perhaps because the baby is still small and his movements are not yet felt, but over the months even sleeping on his stomach will be a little uncomfortable. The weight of the baby bump on the abdomen and lungs will make you breathe badly and the baby will kick a lot. During the day, in fact, the movements that the mother makes and the mere fact of walking gently cradle the little one who therefore sleeps a lot. At night, however, he stays awake longer and moves and kicks. At this point, lying on your stomach with the baby kicking you left and right will not be very comfortable, and sometimes it will annoy you a lot.

Sleep in pregnancy right side

As we said, the most comfortable position for sleeping during the nine months of pregnancy is on the left side because in this way the uterus does not press on the inferior vena cava, through which the blood rises from the lower limbs to the heart, it does not press on the liver and improves feto-placental circulation. Even better on the left side with bent knees, perhaps with a pillow between the legs on which to gently rest the baby bump and another pillow behind the back.

Sleeping during pregnancy is good for you

Why is sleep during pregnancy good for you? During sleep we rest, cells renew themselves and, in view of the first months after childbirth, when sleeping could become difficult, it is important to carve out moments of rest even during the day. So yes ai naps in the morning or early afternoon. In addition, some studies have suggested that poor sleep quality during pregnancy can alter a mother's immune processes and increase the risk of low birth weight.

Get plenty of sleep during pregnancy

Many expectant mothers are wondering if this desire to always sleep is good. The answer is: everything is normal! Hormonal changes promote drowsiness and it is very common for pregnant women, especially in the first months, to always sleep and fall asleep as soon as possible. The responsibility lies with the increase in progesterone which promotes drowsiness and fatigue.

Audio Video How to sleep in pregnancy: positions and advice
How to educate children to respect the environment? ❯

add a comment of How to sleep in pregnancy: positions and advice