Implant losses, how they are and how long they last 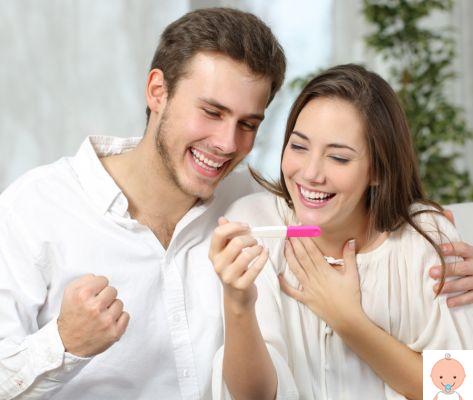 How are the plant losses e how long they last? Our midwife Chiara Matteuzzi explains how to recognize the implantation losses in pregnancy.

L'amenorrhea, or absence of menstruation, is the most evident and significant symptom of pregnancy in progress; despite this, in 6-7% of the initial pregnancies there can be some blood loss, similar to menstruation: these cases often coincide with the moment in which the embryo comes into contact with the inner wall of the uterus, called the endometrium, and there it begins to be created "a cozy nest"in which to continue its development; these losses are in fact called"implantation losses in pregnancy"The implantation of a new life in the uterine wall is also called nesting or nesting.

Implantation leaks, how to distinguish them from premenstrual spotting

L'plant of the embryo therefore coincides with the moment in which it ends its journey from the tuba, where the fertilization, to the uterus, where it will reside for nine months. Among the symptoms of the implant that are noted are some reddish-brown discharge. It is an event that can scare women, because it can make them think of one threat of miscarriage, or upon the arrival of menstruation.

Read also: Symptoms of pregnancy in the first week

The reason why these "blood loss after conception"Is not yet fully known: they are thought to be due to the rupture of small blood vessels on the inner surface of the uterus, or to blood remaining in the uterine cavity from the previous menstruation, or even due to minor trauma, without clinical significance, caused on the neck of the uterus, whose tissues have already been modified by the first hormones of pregnancy, during intercourse.

Read also: A complete guide on how to recognize implantation leaks

I am often asked "how are the nesting losses", that colore have, what is their consistency and duration.

Women who experiment implantation spotting, report having found pink spots, whitish but streaked with blood or, often, brownish on the briefs or on the toilet paper.

They are short lived and the consistency can be both watery and denser: the latter due to physiological leukorrhea (abundant white discharge) already from the first moments of pregnancy and used itself, sometimes, as pregnancy symptom. Rosy "color plant losses" as mentioned, they can also be a sign of nesting.

White losses in pregnancy, how to interpret them

Let us now consider the case that the cycle delay is due to one early pregnancy. How to tell if you are pregnant? Among the first symptoms, many women report the appearance of these whitish, or rather milky, discharge. Early in pregnancy hormonal upheavals occur that affect all body structures. In particular, estrogen is responsible for these changes, which also affect the vagina and all its structures (muscles and epithelial tissue). In early pregnancy, the origin and cause of the discharge is actually not unlike any of the conditions discussed above. So it is a "cleaning" system but it is also a defense system from external aggressions and reflects the greater imbibition of the tissues (meaning that the tissues have more liquids inside them) caused by estrogen. The losses present in early pregnancy may cease, or more likely decrease, as pregnancy progresses or remain constant, a condition known as leucorrea gravidica and that we will go to face in a moment.

The most frequent losses are color brown and are not accompanied by pain or discomfort in the lower abdomen; or at least this is true for most women.

Let's say that, usually, brown blood (brownish) indicates a few days old blood while pink-red blood indicates "fresh" blood. So the nesting losses, not only can they be a sign of implantation, but based on their color we can roughly indicate whether such implantation has occurred a few days ago or is a more recent event.

How long do they last from implantation losses

It is not yet possible to define a precise duration, but in most cases it does not go beyond 48 hours. Plant losses they can last even a few hours, but only a small percentage of women are able to observe them as they are often confused with it premenstrual spotting. If they last more than two days, and were accompanied by abdominal pain, it could be premenstrual spotting.

We often read, on forums and among the questions that come to the editorial office, of women who have red or other colored losses abundant, which also last two days. They believe they are linked to the arrival of the menstrual cycle, but by taking the pregnancy test they discover that they are pregnant. Implant losses can therefore be very light, and in some cases more intense. Their consistency may vary based on the amount of blood and vaginal mucus they contain. However, in most cases, implantation losses are neither persistent nor abundant, as the nesting of the embryo causes a light blood flow.

Implantation losses after how many days from intercourse

In a woman with a 28-day menstrual cycle, we can assume that the conception took place around the 14th day, in the middle of fertile period. After fertilization, the fertilized egg moves to the uterus and it takes a few days to complete this process, after which it nestles and it is at this point that implantation losses can occur. Plant losses, therefore, can occur at a distance of 10-15 days from conception which is why they can be easily confused with menstruation.

Implant losses as they are

What distinguishes implantation losses from menstruation is certainly the duration and abundance of the bleeding: implantation losses are generally of brownish red or brownish color and they are not abundant, it is more than one spotting which lasts a few hours or at most a couple of days. If the leaks are more abundant and last longer they are probably not caused by the implant.

Implant losses: after how many days to do the test

When is the best time to take a pregnancy test and have a safe result perhaps without getting a second light line on the test? After how many days can it be done? Surely it would be better to wait at least a week from the alleged date on which the menstruation should have arrived. Especially if you have a regular cycle, a one week delay it could be a symptom of pregnancy, even if it's not 100% sure. But not all mothers looking for a baby can wait that long and often can't wait to take the test.

Gelatinous leaks in pregnancy: what do they mean? ❯

add a comment of Implant losses, how they are and how long they last