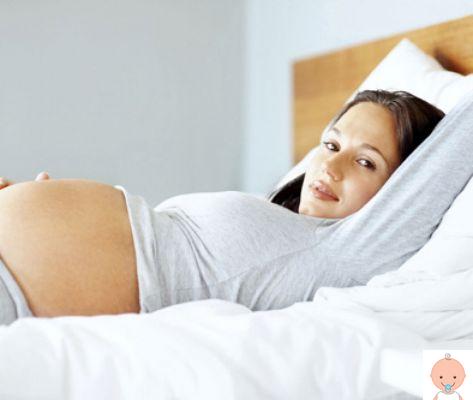 There are methods that allow the expectant mother to get in touch with the baby that she carries in her womb and send him positive messages using only caresses or breaths? Yes, these methods, still little known among mothers and peasants, are known as aptonomia and rebirthing.

The baby in the belly already has the basis of his character and of the individual he will be. When these elements are born they will already be partially well defined but only as they grow up will they refine, especially based on the characteristics and conditions in which the child will grow up and be educated. This also applies to the emotional relationships: the bond between mother and child is born and increases immediately after birth, but there are some methods to strengthen the mother-child relationship from before birth and which now also allow the Pope to introduce themselves into the mother-baby couple, allowing them to experience pregnancy and birth not as a stranger.


These techniques are known as aptonomia e rebirthing and allow you to create an intense and deep emotional bond with the fetus in the womb through touch and breath. In some cases, special preparation courses for childbirth are organized at the municipal counseling center or in the city hospitals, which also include learning these techniques.

The term aptonomia it literally means touch science and allows mum and dad, starting from about the fifth month of gestation or when the baby's movements begin to feel, to get in touch with the baby through special massages. In this way it is possible to send him messages of love and well-being, laying the foundations of that relationship which at birth can only be symbiotic. This discipline is quite recent: it was born in Holland in the seventies and then spread and developed in France; in the country it is still partially unknown and therefore little exploited.

To get in touch with the baby, the mother will first have to learn ea to relax and to withdraw from the outside world; he will therefore have to carve out moments only for himself and the little one.

Read also: What the baby feels in the mother's belly

At any time as long as there is serenity and tranquility. On the floor let's lie on our back on a mat or on a cover and try to understand, through the palpation of the womb, where is the bottom of the uterus, which in this period is located approximately in correspondence with the navel.


By touching lightly and delicately and also checking through the hips up to where we feel resistance, we can understand what position the baby is in: if we feel a certain resistance it means that we are touching feet, head or bottom, while if the hands do not have difficulty in meeting means that the baby is in a longitudinal position. After focusing on how the baby is positioned, let's imagine with closed eyes that the air around us is of a colore, our favorite, we breathe in and imagine that this goes down from the chest to the abdomen so that it can envelop the whole body of our little one; then, during exhalation, we throw away the air as if it were going out directly from the navel "emptying" the belly up to wrap the little one in a hug which starts directly from the walls of the uterus, which, devoid of air, adheres to the baby.

Let's repeat this exercise several times until we are completely relaxed and begin to implement proper aptonomy.

While we are exhaling, that is when we feel the belly deflating, we lightly place the fingers on the belly and look for the "boundaries" of the baby, just as we did at the beginning to understand the position; we place our hands as if we were hugging him and while we send him ours thoughts of joy and love, we move our hands as if to rock it.

We pause for a few seconds and with amazement we realize that our little one answers us! Yes, we are in contact with our treasure, who will be felt with kicks and movements, as if to tell us to continue to rock and pamper him!

When the pregnancy has reached the third trimester and the mother has by now learned to get in touch with her baby, you can try to involve the father in this tender loving embrace who, helped by his mother, will also learn to "talk" "and to communicate with the little one. To do this, it is enough for the father to sit behind his mother, embracing her in an embrace and for him to follow the movements and directions of the future mother. So the little one will feel that the father also wants communicate with he.

Another method to get in touch with the baby already during gestation is the rebirthing, which literally means rebirth, a technique born in the United States in the seventies and which is based on a particular breathing mode which does not foresee interruptions but continues in a continuous and circular way, always using the same channel or nose or mouth.

To put this technique into practice and learn the discipline, you will probably need the help of a specialist who will show us how to proceed:

Read also: The baby feels the happiness of the mother

After we have learned the technique, we can also involve our partner, to make him aware of the paternal role he will play and to make concrete the idea of ​​the child growing in the womb, which is otherwise realized, for the vast majority of men. , only after the birth of the baby. So by letting the partner lie behind us and asking him to gird our wombs, we begin to breathe in a synchronized and harmonious way and we communicate with the baby by transmitting our thoughts to him.

How motherhood makes you a better woman ❯