Is your child born on Christmas? Call it with the name of a character from the nativity scene 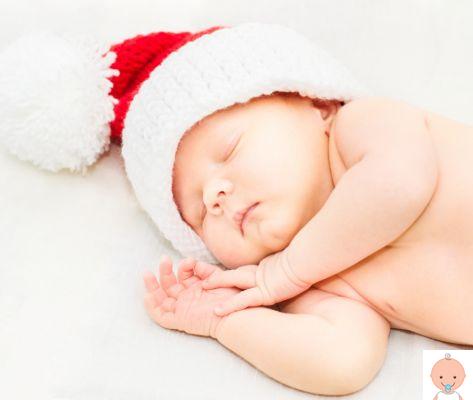 There are children who will be born at Christmas or on holidays. A happy event that in the days of the Christmas holidays also takes on an extra meaning. Maybe their parents have already chosen the name to give them, but for all those who are still undecided, why not give them one of the names inspired by Christmas or to one of the characters of the creche? One more way to remember the birth that took place in this very special period of the year!

The most beautiful names in the Bible

Eve, Adam, Maria, Anna and many others. The Bible is full of beautiful names for children

So here are all the names we found gods characters of the nativity scene and their meaning, from which you can take a cue to choose the name of your boy, with a male name, or of your girl. Of course, some are really special names ... but maybe there is someone who will want to choose them all the same for their son (or daughter).


The name Maria derives from the Hebrew Maryàm and means "princess, lady". The name can be given to children in addition to the male name chosen for them, such as Luca Maria. Or there is the male variant Mario. The name day is celebrated on 12 September, the day in which the Holy Mother of Jesus is remembered.

The name Giuseppe derives from the Hebrew Josef and means "increased by God". It is one of the most popular male names. It can also be used for women, in the Giuseppina version. The name day is celebrated on March 19, the day in which St. Joseph, the husband of Mary and the putative father of Jesus is remembered. In fact, on this day we also celebrate Father's Day.

The name Jesus derives from the Hebrew Yeshua and means "God is salvation". Out of respect for the figure of Christ, the Redeemer, this name is very rare in the country. There are various dates on which the name day can be celebrated, but the most common date is January 1st, the day in which the Circumcision of Jesus Christ is remembered.

The name Stella has a Latin origin and means luminous star. In the Christian context this name is widespread due to the devotion to Maria Santissima della Stella and is often associated with the name of Mary (Maristella or Mariastella). The name day is celebrated on 11 May, the day in which Saint Eustella is remembered, a martyr in Saintonge in the third century.

The name Angelo means "messenger". According to the Christian tradition, in fact, the angels were the messengers of God. The angels mentioned in the sacred texts are mainly Michael, Raphael and Gabriel (which can therefore be valid alternatives to the name Angel). The name day is celebrated on 11 April. In the female variant, Angela, the name day is instead celebrated on July 15, the day in which the blessed Angelina da Monte Giove is remembered, widow of Giovanni da Termis, count of Civitella del Tronto, who died in Foligno in 1439.

The name Gaspare has Persian origin and means "reputable teacher". The name day is celebrated on January 6, the day on which the Magi arrived in front of the hut to bring gold, frankincense and myrrh as a gift to the Child Jesus.

The name Melchior comes from the Hebrew Melki'or and means "my king is light". His name day is also celebrated on January 6, to commemorate the arrival of the Magi.

In the Neapolitan nativity scene, one of the inevitable characters is the gypsy. According to a Christmas legend, the Cumaean Sibyl had predicted the birth of the Redeemer and thought she was the virgin who would give birth to him. Then when the Sibyl heard the angels announce the birth of Jesus, she realized that she had sin of presumption and was transformed into a nocturnal bird. The name Sibilla derives from the Greek Sibylla, which means "divine will" or "who makes known the will of God". And in fact in Greek and Roman mythology the term "sibyl" was given to the prophetesses and priestesses of Apollo, who were able to predict the future. The name day is celebrated on 23 March, the day in which the Dominican nun Blessed Sibillina Biscossi is remembered.

According to a legend, Stefania was a virgin woman who, at the birth of the Redeemer, wanted to approach the cave to worship him. But the angels forbade her to come near, because unmarried women could not visit the Madonna. Then Stefania took a stone and wrapped it in swaddling clothes, pretending that she was a child. She and she managed to reach the hut the day after Jesus was born, on December 26th. When she arrived in front of Mary, the miracle took place: the stone was transformed into a child in flesh and blood, called Stephen. The name Stefano (or Stefania) derives from the Greek stéphanos and means "crown". The name day is celebrated on December 26, the day in which St. Stephen, the first Christian martyr, is also remembered.

add a comment of Is your child born on Christmas? Call it with the name of a character from the nativity scene