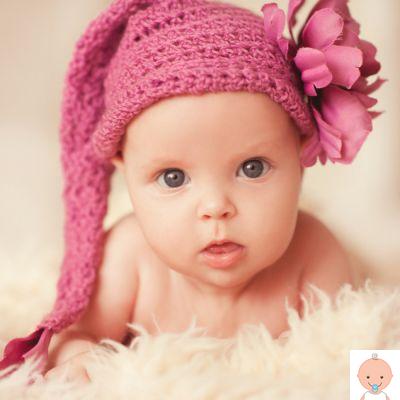 Jessica is a beautiful name feminine which can be an excellent choice for those who prefer less common names and at the same time have an ancient meaning and origin. Let's find out together when we celebrate thename-day, what is its origin and the spread of Jessica name for baby girl.

The name Jessica derives from the Hebrew Yiskah (probably with the meaning of "observed by God") and then taken up by the Greeks as Ieskha and by the Latins as Jesca. In the Old Testament Yiskah (Isca) is one of the daughters of Heran, brother of Abraham.

What is the spread of the name Jessica?

We first find the name Jessica in the play by William Shakespeare The merchant of Venice, in which Jessica is the daughter of the Jewish merchant Shylock. It became an extremely popular name especially in the 80s and 90s in the US and by 2005 it was among the most popular names in the UK.

In the country it experienced a moment of great popularity especially in the nineties, but today it can be considered undoubtedly a rare name. Suffice it to say that, in the country, according to i ISTAT data relative to the most common names, in 1999 as many as 1166 girls were called Jessica, while in 2022 there were only 88.

When is Jessica's name day date?

When is Saint Jessica celebrated? In reality there is no saint bearing this name, so the name is adhespota and the name day can be celebrated on November 1st, on All Saints' Day.

Gessica is an el paesena variant of the name Jessica, which instead has a decidedly international flavor and remains unchanged in most of the languages ​​of the world (only in Spanish we find the name Yésica). Certainly Gessica is even less common than the name Jessica: in 2022 fewer than 5 girls were called this way in the country.

What is the diminutive of Jessica?

Of course the hypocoristic Jessica and her diminutives can be:

How is Jessica's character?

Discreet and quite shy, Jessica is a person dinamica with a taste for adventure. She is thoughtful and tends to act methodically. She doesn't always have confidence in herself and is very emotional, which is why she has a certain tendency to get angry and change moods. Jessica is laborious, strives for success and has a deep professional conscience. She generously dedicates herself to those she loves and to the activities she is passionate about. Jessica is loyal, determined, passionate about what interests her, She stands out for her great character qualities, such as seriousness, charm, courage.

Jessica is refined, sensitive to beauty and art, she will do anything to please and be appreciated. She has a deep sense of justice and is demanding and a perfectionist.

What profession will Jessica make? Jessica will be influenced by the family sphere, which can also have an influence on her career choices. Her inclinations will lead her to choose jobs such as caring for others (such as those in the medical or legal fields), but also professions where oral and written expression is required or those related to creativity.

What zodiac sign is associated with the name Jessica?

The zodiac sign corresponding to Jessica's personality is Capricorn. People of this sign are sincere, reasonable, confident and sensitive.

What is Jessica's precious stone?

Which color is associated with Jessica?

The color attributed to Jessica is blu, which reflects wisdom, intelligence and creativity. It is a color associated with intuition, knowledge and sincerity.

Il 3 is Jessica's lucky number, she exudes a deep creative energy and helps develop creativity and make the most of their knowledge.

What song should you dedicate to Jessica?

add a comment of Jessica name for girl: name day, meaning and diffusion