Karyotype examination: what it is and how it takes place 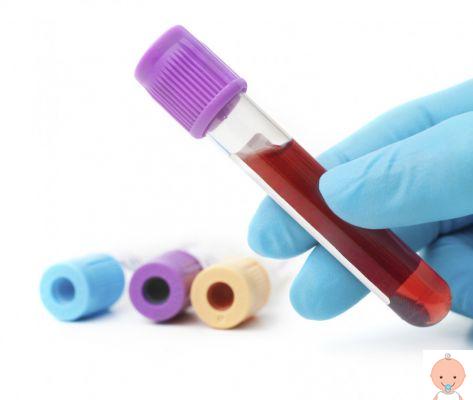 
This premise serves to understand what the karyotype examination is for and how it takes place.


The karyotype examination consists of a simple blood collection by both intended parents and in an analysis chromosomal. If done before a pregnancy, this test allows to verify the existence of chromosomal anomalies in the karyotype of the parents, anomalies that could come passed on to the child and causing genetic diseases, such as cystic fibrosis, thalassemia or chromosomal diseases such as Down syndrome.
It is generally recommended before conception for couples in which one of the two partners (or both) are carriers of hereditary diseases and are likely to pass it on to their child.

Pregnancy: the special tests to do

The examination of the karyotype of the fetus can then be carried out during pregnancy, through more invasive tests, such as amniocentesis or CVS, to determine the presence of chromosomal anomalies such as to cause diseases or malformations.

These exams are recommended for all women who have passed the 35 years because after this age the probabilities of fetal chromosomal abnormalities increase (in 96% of cases it is trisomy 21, 18, 13, X, Y).

Currently, the ministerial guidelines require the woman to first undergo the combined test (blood test and nuchal translucency) around the 10-13th week to establish the percentage of risk and in the event of a positive result, the woman will be granted access to the amniocentesis free of charge in a public hospital.

But theamniocentesis it can also be done privately. The examination must be done between the 15th and 17th week of gestation and consists in taking a sample of amniotic fluid which will then be analyzed in detail from the point of view of the karyotype.

12 ways to choose the sex of the baby

Rumors, legends, old tales and more: here are 12 ways to increase the chances of having a boy or a girl

La villocentesis (chorionic villus sampling), on the other hand, must be done between the 10th and 12th week and involves taking a sample of cells from the placenta.
The examination will reveal any anomalies and the baby's sex: in fact, the number of chromosomes and sex chromosomes will be read in the report.
Both tests, CVS and amniocentesis, involve a percentage, albeit low, of risk of abortion spontaneous.

Examples of a pregnant diet for healthy eating ❯

add a comment of Karyotype examination: what it is and how it takes place