Leaks in Pregnancy: When Are They Worrying? 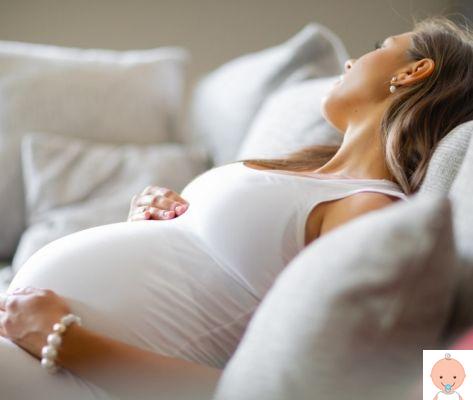 Le losses in pregnancy they can be:

Losses can be dense, or they can be milder and more transparent. The fact is that discovering a few drops of blood or whitish liquid on the slip, or suddenly being subject to substantial loss of liquids, is not the best surprise that everyone expects.


But what do these losses mean and when should immediate medical help be sought?

In pregnancy, as in a woman's normal menstrual cycle, it is possible to experience discharge. They can be bloody, yellow or just plain white like those we discover when we are during the most fertile days of our menstrual cycle. In this article we will look at cosa means the occurrence of each type of loss that we have listed above.

Losses in early pregnancy, what do they report?

Losses in early pregnancy they usually signal the correct implantation of the embryo (they are, therefore, of a reddish color similar to a spotting). But leucorrhea is also common, that is, white, odorless and more abundant losses.

In the first three months of pregnancy, therefore, bleeding can occur frequently and is not usually a sign of problems. If the losses occur in the second and third trimesters of pregnancy, then they could be a wake-up call for a possible complication. Therefore all cases of bleeding should be reported to your doctor or obstetric emergency room.

Blood loss occurs, in some cases, after a few days from conception, or rather after about two weeks, and can be considered among the symptoms of a pregnancy in progress. They are brown in color and are not conspicuous, but mild and asymptomatic - they do not cause abdominal or other pain. These are called "plant losses"and are generated by the allocation of the fertilized egg in the uterus.

The blood losses that occur on the days when the woman would have had her menstruation are not huge and not even worrying. They occur because the body's hormonal status is not so balanced that it can prevent blood loss (it is the different hormonal level in pregnancy that generates this phenomenon, that is, the blocking of normal periodic monthly bleeding).

Pink blood loss they too are quite common and could arise from the cervix due to expansion, abrasions or other problems.

Other minor non-worrying losses may occur during sexual intercourse, due to some physiological phenomena, which occur with pregnancy in the female genital tract, in fact the cervix is ​​subject to the presence of greater quantities of blood in its area leading to its greater vulnerability to sexual intercourse.

Pink discharge in the first trimester of pregnancy

Slightly pink discharge in the first few months can easily indicate that implantation is taking place in the embryo in the uterine walls.

Discharge pink in the second trimester of pregnancy

Slight bleeding in the first trimester is quite common, less so in the second trimester, and a leak should always be reported to the doctor. It could be caused by an infection, inflammation of the cervix, or problems with the placenta.

Discharge pink in the third trimester of pregnancy

Mild spotting during the last months of pregnancy is quite common after intercourse or after a check-up visit. Usually it doesn't have to worry, but it should always be reported to the doctor and a more abundant bleeding should never be ignored.

What are the dangerous losses in pregnancy

Le dangerous losses in pregnancy they can be accompanied by abdominal pains - stabbing or weak - and are quite copious. In these cases, the phenomenon could be linked to a possible one threat of abortion, or to detachment of the placenta or to a premature labor, or be synonymous with a ectopic pregnancy. In all these cases, of course, you must urgently consult a doctor.

These types of losses are physiological. A woman shouldn't be surprised if she suddenly feels something flow in her vagina and then settles on her panties: this is normal. The white losses during pregnancy they are almost dense and are linked to a hormonal shift, i.e. an increase in the level of estrogen.

Transparent discharge in pregnancy, what is the cause?

Le causes of transparent discharge in pregnancy should be investigated based on the time of gestation. In the first few weeks, the leucorrea gravidica which is a very normal state in pregnancy and is also due to the movements of the uterus which contracts, without causing pain.

If the losses they become very copious, frequent and uncontrollable, then they could be synonymous with some phenomenon to keep under control. Sometimes their consistency changes, as does the quantity, they become watery and heavier. In this case it is good to consult a doctor, as the water may be breaking, if we are in periods close to childbirth, they could be synonymous with infection, if they were accompanied by vaginal burning.

Losses in pregnancy in the third trimester. Why can they manifest themselves?

Le losses in pregnancy in the third trimester they can manifest themselves because the leucorrhea gravidarum which occurs mainly with discolouration white / yellowish. In the ninth month, pay attention to the breaking of the water: in this case the losses are really abundant, of a watery consistency and transparent color and can also be streaked with pink.

The breaking of the waters can manifest itself in two ways:

Leaks in pregnancy when to worry?

If the losses of white color, of filamentous consistency and without a particular odor are physiological during the whole pregnancy, they should never be underestimated:

In general, any loss that may seem excessive, too abundant or of a strange color should always be reported to the doctor.

Brown leaks, how to interpret them and when to worry ❯

add a comment of Leaks in Pregnancy: When Are They Worrying?