Leaving a child afterwards: it happened to Anna Falchi 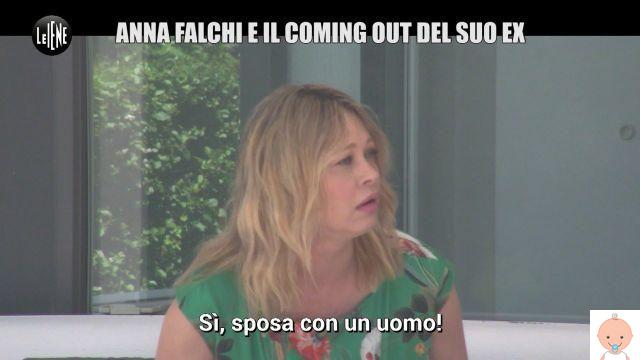 On 28 October Anna Falchi became the mother of a beautiful girl named Alyssa at the Policlinico Agostino Gemelli hospital in the city. Anna Falchi and her father Denny Montesi had beamed the announcement as befits two parents, hoping in their hearts that the child would restore serenity in their relationship that had suffered some turbulence.
Instead two months later between the two new parents there is a deep crisis "Between me and my daughter's father, things are going very badly: our relationship at this moment is interrupted". Anna Falchi declares it in an interview with the weekly 'Chi' where the actress poses for the first time with her daughter for beautiful photos. "He and I argue all the time and about everything. We have different ways of thinking and different lifestyles. There is really incompatibility of character," explains Falchi. "We both made mistakes - he continues - but we thought that with the birth of the child everything would go right. Instead a child if he does not unite, divides. After the crisis we had last summer we tried to put the pieces back together, but it didn't help, there is too much hatred between us, too much rancor ". "If I talk about my crisis with Denny it's because I want to take back my life, I want to be able to see who I want and I don't want any misunderstandings. But this situation really makes me suffer. The only thing that consoles me is that her a child is still too young to understand. And anyway - she concludes - what is certain is that Denny is there as a father and will always be there, I will never prevent him from seeing Alyssa ".

After the sad speeches Anna lets herself go to love for her baby: "She is the same as me when she was born. Looking at my daughter and seeing me is fantastic " and again “I have always had a great sense of responsibility. Now I have refined it. On the other hand, what is brand new to me is this feeling of not loneliness: from now on I have the certainty that I will never be alone again. And it is something that fills me with joy ”.
Anna will devote herself fully to the little girl: “No nanny, just the idea of ​​leaving her with someone other than my mother makes me sick. I like to feel this good scent of a child, of life, of the future in my home. Since Alyssa was born, I've only been a mother and I don't lack the freedom I used to be. My first days are very full: I wash, iron, disinfect, change her, keep her on my chest for hours and hours, give her milk with a bottle ".
Anna Falchi had declared that she would not breastfeed in order not to ruin her breasts, her strong point and to those who criticized her for these strong statements, she replied: “Many women in the show say they have no milk but that's not true. In reality they do it because they don't want to ruin their breasts ".
"I will not breastfeed him: it is something that does not belong to me. Perhaps my need to remain feminine overcomes my maternal instinct".

Artificial milk: all the steps for the perfect feeding ❯

add a comment of Leaving a child afterwards: it happened to Anna Falchi