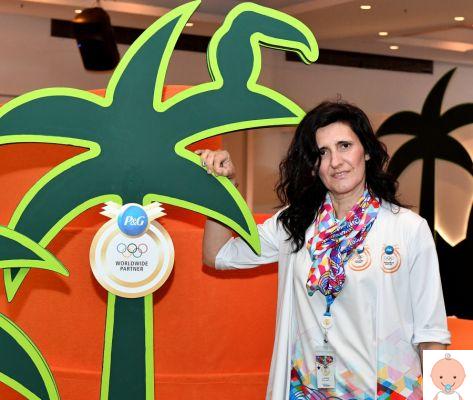 When Greg left home to pursue every athlete's dream, Lorena she had to wipe away her tears secretly so as not to be seen by her son: too soon to let him go, at 16 a boy still needs his mother to take care of him. Not so much for the always ready dinner and the shirts to be ironed, rather because at that age it is easy to go wrong, get lost and risk not being found anymore.

And yet Lorena Boccaletti, married in Paltrinieri, mom of our top athlete in the Rio 2022 Olympic swimming pool, he found the strength to say “Go Gregorio, be careful and do your best”. Him, who at 21 already counts seven gold medals between World and European Championships, he listened, put into practice and, with the unconditional support of his family and the trust transmitted to him, he is now in Brazil playing his cards to try to fulfill that Olympic dream cultivated since childhood.

Mother Lorena arrived in Rio de Janeiro too: together with Greg she was chosen by Procter&Gamble, top partner of the Games, like testimonial of the "Thank you very much, Mom" ​​initiative, a campaign launched on the occasion of the London 2022 Olympics and revived on the occasion of the Green Gold Games to celebrate the role that mothers play every day in supporting athletes towards their greatest wish: a five-circle medal.

Pampered in the Family Home set up by P&G, a home away from home as they like to call it in Procter & Gamble, Lorena is still awaiting her son's competition with all due anxiety.

Understandable: On the other hand - he says - we know how much Gregory cares and for a mother there is no greater satisfaction than seeing a child fulfilled.

Try to get distracted between a churrasquaria dinner and a make-up in the P&G Family Home. Stroll along the beaches of Copacabana, stop at the foot of Christ the Redeemer with your nose up: Rio offers all this, between colors and contrasts that Lorena looks at with the eyes of a mother when the car passes by to go to Largo do Boticario. close to one of the many favelas of the carioca metropolis. “Look at those shacks - she sighs -, what future can the children who live there have?”. She thinks of their dreams, and they are certainly not Gregorio's. She and her husband Luca have made many sacrifices, but they seem nothing compared to those of those who struggle every day to get by.

It's time to go back to the hotel: on TV there is swimming with Gregorio's next opponents. Sun Yang, the most formidable rival in the 1500sl, wins a silver in the 400 and a gold in the 200. It is already in the race climate, Lorena studies her opponents and sighs again, anxiously waiting to see her baby in the water.

add a comment of Lorena, mother of Gregorio Paltrinieri, testimonial for Procter & Gamble in Rio