Lunar calendar: how it affects the sex and date of birth of the baby 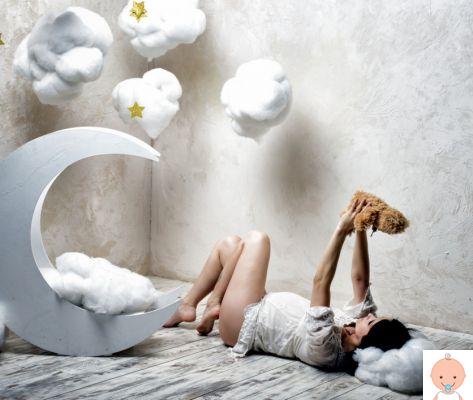 What is the purpose of consulting the lunar calendar? Can it really be useful in increasing the chances of getting pregnant or even having a boy or a girl? Let's start by saying that the Luna, in its various phases, undoubtedly affects the tides, while there is no scientific evidence that it could have any effect on crops or other aspects of nature or human biology. Certainly many believe that the Moon can affect conception and even childbirth, so let's try to see what is true.

The Moon moves continuously with respect to the Sun and the Earth and its position changes over a period of 29 days, in which it is possible to distinguish the different ones moon phases.

Meaning of the new Moon

The new moon (new moon) occurs when the Moon is positioned between the Earth and the Sun. The three planets are in approximate alignment and the entire illuminated portion of the Moon is on the back side of the Moon, so we cannot see it because it shows us its dark face.

Video: Influence of the moon on the sex and date of birth of the baby

Does the Moon affect the sex of the baby?

Is it true that the full moon affects the sex of the unborn child? A study a few years ago analyzed this theory involving Indian couples between the ages of 20 and 40 and concluded that, during the full moon, there would be a greater likelihood of conceiving a boy, while to conceive a female conception should be attempted a few days before the full moon.

Remember that the Chinese pregnancy calendar is also based on the phases of the moon and tries to predict the sex of the baby by crossing the data relating to the moment of conception and the age of the mother.

How the Moon Affects Pregnancy

Certainly, the suggestion that the menstrual cycle lasts exactly as long as the lunar one (and that it covers, on average, the time between two full moons) has favored the spread of popular beliefs and also some scientific theory that would support the idea that during the full moon make it easier to get pregnant. According to supporters of this hypothesis, the Moon influences the production of melatonin, a hormone involved in the regulation of the menstrual cycle. However, many gynecologists do not take this theory seriously and claim that there are no concrete studies that show a link between ovulation and the lunar cycle and that the only thing that binds the two cycles is almost the duration.

The 10 myths of pregnancy

How many beliefs are felt during pregnancy! Here are the ten most common myths

Premise that there are no scientific confirmations of the fact that the Moon can influence the sex of the child, we remind you that it is the children who determine the sex spermatozoa (so it's all dad's fault!). If the sperm that fertilizes the oocyte will be of the Y type, it will join the X of the oocyte and give birth to a boy (XY), if instead the X chromosome yields then a girl (XX) will be born.

Anyway, according to popular belief, conceive during the days of Crescent moon should ensure the arrival of a male, while in the days of falling moon you would be more likely to give birth to one Sissy.

Second ancient writings Assyrian-Babylonian woman's fertility would be influenced by moon phases therefore, in some periods, it would be easier to conceive and also to increase the chances of having a boy or a girl. The Slovak doctor Eugene Jonas used these texts to elaborate complicated models and statistics that led to the formulation and dissemination of the Method John, which serves both to avoid unwanted pregnancy and to maximize the chances of conceiving.

According to the Jonas method, a woman's day of maximum fertility is when, during the month, she returns to her same position that she had at the time of her birth. Furthermore, the sex of the child would depend on the position in which the Moon is located at the moment of conception.

Influence of the Moon on the date of birth

Le monthly phasesi would also be related to others popular beliefs. For example if conception takes place on days with falling moon it is likely that the date of delivery will be later than the expected date of delivery, while if the conception occurred with the Crescent moon or on full moon days it is easier to give birth earlier.

We often read that births occur more frequently during the lunar changing phases. But how much is it true? If we listen to the tales of midwives and we read the observations made in some birth points we could conclude that in the days of the full moon the maternity wards are strangely crowded and that there really is a link between the full moon and the increase in the birth rate. In short, despite theabsence of scientific studies in this regard, the belief still remains rooted that in the days of the full moon there is a greater probability of giving birth.

Does the Moon affect labor?

Most of the beliefs concerning theinfluence of the Moon on childbirth are linked to the theory ofgravitational attraction. As our midwife explains:

the gravitational attraction in the days of full moon causes the tide to rise consistently, and in the same way the amniotic fluid would respond to the laws of physics. It is then drawn outward, causing the sac to break and go into labor.

In fact, two studies conducted on this subject have failed to establish a real connection between the phases of the moon and the onset of labor.

Since the belief that the days of the full moon are the most favorable days for giving birth and that the phases of the moon, and changes, can affect the date of birth, many pregnant women consult the lunar calendar to know in advance when they will give birth to their baby.

To follow the evolution of the phases of the moon, there are several tools and sites on the net, like this one, which offer the opportunity to monitor the lunar calendar 2022.

Audio Video Lunar calendar: how it affects the sex and date of birth of the baby
Mayan Conception Calendar: How It Works ❯

add a comment of Lunar calendar: how it affects the sex and date of birth of the baby