Madonna: identikit of an iron mother 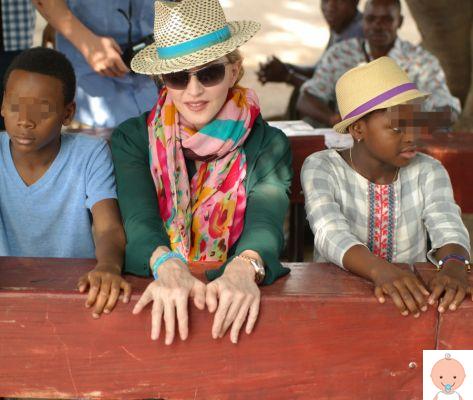 Louise Veronica Ciccone or Madonna, mother all in one piece. And who would have thought twenty years ago that the most transgressive and provocative star in the world, the ex of Sean Penn, the muse of Jean Paul Gaultier, the champion of bisexuality and free love, the one who simulated orgasms during concerts, would become one an upright mother for her four children. Indeed, more than upright, just severe, a iron mom. And who, by his admission, keeps his little ones "always under control". Help.

Read also: What mom will you be? Start with the right style by keeping an eye on the celebs!

Madonna became a mother for the first time in 38 years: Lola's father (aka Lourdes Maria) is Carlos Leon, then the pop star's personal trainer. During that time she Madonna claimed to her right and she misses that she is radiant with joy and never had morning sickness. The American diva had been dreaming of becoming a mother for a while so that a few months before meeting the future father of her daughter, she had declared that she wanted to put an ad in a newspaper to look for a specimen of "male" suitable to fertilize her. There was no need. In a park while she was jogging she met the Cuban dancer and the rest is… Lola!


Her style with the baby bump

Quick-change Madonna par excellence on stage and in social events, he instead experienced the belly in a low profile way. Her pregnant look kept her between the lines. It was also the end of the 90s and the trend did not require stretch dresses to outline the sweet expectation like today. For the pop star, therefore, the green light to abe extralarge and deceive as in the best of traditions!

Being a child of Madonna doesn't have to be easy. Lady Ciccone seems to be worse than Miss Rottermaier, at least as far as we know. A few years ago the Daily Mail published some strict rules that Madonna wanted her sons Rocco and David to follow when they visited their father Guy Ritchie. Among the rules was the absolute ban on watching TV, on non-organic foods, on normal water which must be replaced by that of Kabbalah, on having 'dirty' hands which must be regularly disinfected and on wearing any clothing that was not sent to them by her. She stuff that Nanny Lucia is Santa Claus by comparison.

Madonna's relationship with her children

The singer often talked about hers very close relationship with the children Lourdes, Rocco and the adopted children Mercy James and David Banda. The singer explained how to reconcile motherhood with her passion for a career. It was on that occasion that she had revealed that her eldest daughter would not have lived much longer at home with her.

My children - said the queen of pop - are my priority. But since they are now big I can no longer take them with me around the world. I would have felt irresponsible if I hadn't stopped the tour to spend time with them. My daughter will be leaving home soon, she concluded.

Madonna will be the undisputed Queen of Pop but first of all she is always a mother like many others!

Her role as a mother

Madonna admitted that "being a mother is very difficult", but added that she likes it "a lot" and that considers her children the most important thing in her life. It is no secret that she is a very attentive and demanding mother with her children, but also very consistent. For example, you recently admitted that you will never tell your children not to take drugs.

I've never been a big fan of drugs. But in the past I can't deny that I've tried a few. Many years have passed, but often immediately after trying them I began to drink water in an attempt to become shiny and let the effect pass. I had this conversation with my children, with Lourdes in particular and I told them to always do things in moderation and to make wise decisions for her life. But I will never give it an imposition because it would be absurd and unfair since I too have had certain experiences.

Everything ranks, there is no doubt.

Maddy's daughter was called Lourdes in memory of his mother, who died when the postar was only 5 years old, who wanted to go on a pilgrimage to Lourdes and did not succeed.

Another stork coming for Madonna?

Madonna at 56 sounded seems to have closed with the pregnancies: in 2022 (therefore when he was 51 years old) he confessed to wanting another child, this time from the toyboy of the time Jesus Luz who, according to him, would have been a fantastic father. Not a suitable one, but just natural. As we know, the son never arrived and after Jesus toyboy has passed that passed under the bridges ...

The other famous mothers

Sore throat in children, if strep throat is the cause ❯

add a comment of Madonna: identikit of an iron mother