Margherita, meaning of the name. Etymology, diffusion and curiosity 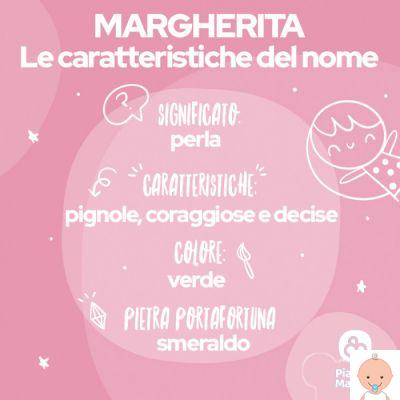 If you love female names inspired by the world of nature and flowers, Margherita is the right choice: in ancient times it was given to emphasize the beauty and brightness of the newborn. We discover in this guide the origin, the meaning, the curiosities of this name for baby girl.

The name day is generally celebrated on 22 February when the Church remembers Santa Margherita di Cortona, patron saint of Casteldelfino. But the 16 October in honor of Saint Margaret Alacoque, founder of the cult of the Sacred Heart and patroness of pregnant women.

It can also be celebrated on other dates, in memory of numerous saints and blessed:

Since Margherita is an extremely popular name over the centuries, its popularity has given rise to many abbreviated and diminutive forms, such as Rita o Greta.

Origins and etymology of the name Margherita

From the etymological point of view, the name Margaret derives from the ancient Greek male μαργαριτης (margarites), in turn from a root common to the Sanskrit मञ्यरी (manyari) or the Persian marvārid. From ancient Greek into Latin it became Margarita.

Meaning of the name Margherita

The meaning of Margherita is "pearl". However, in el paeseno and in Spanish, the word "margherita" has undergone a semantic change over time, and as early as the late Middle Ages it began to be commonly used to designate various fiori similar to each other with which today even the name is generally associated.

Diffusion of the name Margherita

The name Margherita has been extremely popular since Middle Ages and also in the Christian communities thanks to the cult of Saint Margaret of Antioch, invoked among other things by women in labor. According to the ISTAT data   Margherita continues to be extremely appreciated by the parents and the villagers: in 1999 it was given to 113 newborn girls while in 2022 1034 girls were called with this name. In 2022 Margherita is in 43rd place in the ranking of the most popular names in the country.

Margherita is pragmatics, complex and often indecipherable. He knows how to use his intelligence, intuition and practical sense well. She is fussy and she doesn't like doing things by halves. Margherita stands out for her courage and her character positive. Margherita is deeply attached to social and family values, she has a great diplomatic ability and defends her ideas of her with fervor and conviction. She's determined when it comes to stick up for a cause she believes in, but is also ready to listen to the opinions of others. Her critical spirit makes Margherita excellent interlocutor, but it also pushes her to listen more to her rational side than the emotional one and to hide her emotions. His analytical spirit it helps her make the right decisions.

Margherita is a lover of nature, hates superficiality, loves to travel and feels enriched by exchanging with others.

What profession will Margherita make? His great professionalism determines his behavior at work; she has a great team spirit and her natural curiosity contributes to her professional growth. Margherita can find gratification above all in the social, economic, financial and legal professions.

The most representative zodiac sign of Margaret's personality is him Scorpio, known for his confidentiality, but also loyalty, idealism and sensitivity.

Il green it is the color of Margherita: it is associated with spiritual life and hope. Furthermore, green promotes balance and introspection.

The gemstone associated with Margaret's temperament is lo Emerald, known to symbolize wisdom.

9 is Margherita's lucky number: it pushes her to complete her projects.

Then let's run through the streets and start dancing

Because she wants joy, because she hates resentment

And then we paint all the walls with buckets of paint

Houses, alleys and buildings, because she loves colors

We collect all the flowers, which can give us spring

Let's build her a cradle, to love each other when it is evening

Then let's go up into the sky, and take a star for her

If you like flower inspired names. Here are other special, elegant and delicate names to give a baby girl:

Marianna, a mother against cancer ❯

add a comment of Margherita, meaning of the name. Etymology, diffusion and curiosity