Marianna, a mother against cancer 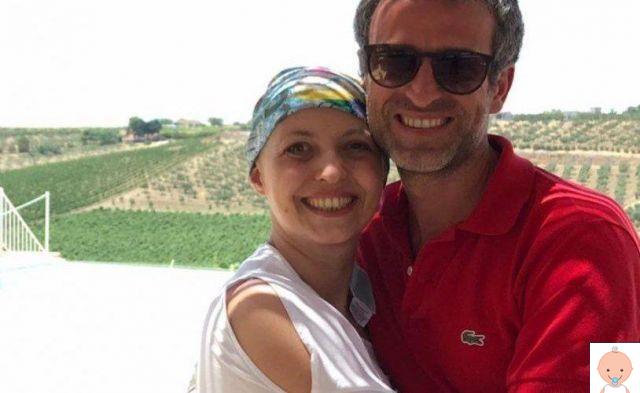 World Cancer Day is celebrated on 4 February. Noi also wants to make her small contribution, telling the story of a woman, of a mother who is fighting in recent months the most important battle of her life: to defeat the tumor and continue to raise her two children. We present Marianna.

Marianna is a 40-year-old woman. She is a lawyer. She is the wife of a surgeon. She is the mother of two children. Marianna is also a daughter. She and a sister. She and a friend. Marianna is one who does not give up, for herself and for her family that she loves madly. Marianna has been fighting for a year and a half against lymphoma, a tumor of the lymphatic system. And she hasn't the slightest intention of giving it to him, even if her illness often forces her to stay away from her loved ones. Marianna is a warrior. As only mothers can be ...

Let's start the story of Marianna Bonomo in July 2022. It is a period of change because she has decided to temporarily leave her city - her (and mine) Palermo - for a provincial town. “In this way, my husband, on duty in Cefalù, would not have had to travel too many kilometers every day. I was also thinking of opening a studio there or in any case after a year of returning to the city ". Projects, as we all do, without thinking that the “unexpected” card, in this “game” which is life, is just around the corner. Lurking, like her illness.

Because of an annoying itch, Marianna undergoes some tests, which however are not of particular concern. You participate in a competition in Palermo: cough is added to itching. But even in this case everything seems absolutely under control. “Return to Castelbuono on Friday - she says. We had a baptism on Saturday. Hairdresser, nails, let's go to the ceremony. I feel unwell at night and tell my husband to call an ambulance. It was a scary moment, I had the feeling of a heart attack and cold. I felt like I was dying. When 118 arrived I was better, but we went to the hospital anyway ”. It all starts that night.


After a series of tests, a suspicious mass appears in the mediastinum, on the chest, which compresses the heart. Here is the feeling of the heart attack where it came from! After a biopsy the diagnosis: lymphoma. It is Marianna's husband, Rosario, who gives her the news. “I ask if she heals herself. And he replies 'in 90% of cases'. I'm calm, the percentage is high. I have to start chemotherapy as soon as possible, but I ask to be able to stay home for a few days. I didn't know how long I was going to stay in the hospital and I wanted to be with my children ”.

Marianna's children are still puppies: today they are 3 and 5 years old. "After the diagnosis I decide to cut my hair short, so they would get used to it." During the therapies the hair will fall out, but the children always have the right word for their mother: “How beautiful you are! I want them like this too ". Nothing better for the body and the mind ...

Her heart is weak, Marianna collapses and ends up in cardiological intensive care, but the treatments continue, stop, change, resume, cannot stop: her lymphoma is in the fourth stage ("what a great ass!", She exclaims in the interview and by phone I perceive the smile). It means that she has galloped enough already and her run must be stopped. Slow-dosing chemo is proposed. “I had a handbag attached and my kids wanted to know what was inside. There were the drugs. The therapy didn't bother me, I even went out for an aperitif with friends. At that point I shaved completely, but I did it myself, I didn't know what reaction I would have ”.

Everything flows, the control MRI in September speaks for itself: the tumor has shrunk by 75%. At the beginning of December, however, a new steep descent. Illness is a bit like a roller coaster: one day you are at the top, feel the adrenaline, the next you go down and the euphoria wears off. Before Christmas, Marianna and her family (she has two sisters and a brother to whom she is closely linked, a visceral love) discover that cancer has also attacked the central nervous system. The situation becomes serious again. Another lap, another race: a new chemo is tried, but it is too strong for Marianna's body that she can only do one cycle.

It's January. It aims out of Sicily. Hope is Professor Corradini at the National Cancer Institute of the city who proposes a different treatment. For a while it works, but just before the summer the results are not as expected. And Marianna finds herself in front of one of those crossroads that no one would ever want to face. On the one hand, there is the autologous transplant. On the other hand, homecoming and palliative care. In practice, a dead end.

“I admit I was in strong doubt - says Marianna -. I had no certainties. I chose the transplant. But first we allowed ourselves a few days of vacation with the children: it was beautiful and we had a lot of fun. Then I left for the city. I had a very strong chemo first and then the transplant. Again a 70% reduction ".

However, Marianna's family is certainly not idle and begins to make contact with the United States where a particular therapy is carried out which has given very encouraging results. The problem is that it is very expensive. Just to see Marianna's medical records, the Lebanese doctor who will then treat her wants 160.000 euros. But this attempt cannot be thrown away. The solidarity machine is triggered. Marianna's relatives launched a fundraiser on GoFundMe that was immediately successful. You are leaving for the States. We are in August 2022.

“The situation was particularly serious, especially in the brain. Therapy had to be started immediately. After 10 days I had less pain, I was walking, the balance problems got better. After a month and a half, I no longer needed a wheelchair. In addition to the treatment, radiotherapy was also needed, which we discovered they were also doing in Negrar, near Verona. On 9 November we return to the country and remain in Veneto until 23 ". The American trip cost 450.000 euros! Of these 270.000 were raised with GoFundMe donations.

Can you imagine what it means to be away from your children 110 days, to leave them to relatives, to be on the other side of the ocean, united only by a smartphone? Marianna lived it. “We made video calls every day and the children were amazed that it was morning with them and night with us. They always asked me when I would be back and at one point they were angry. When the return was near I told them to draw 11 squares, one for each day that was missing. They had to color one a day. I made him do one more and came home by surprise. They found me on the sofa in the living room. They ran up to my husband and me and held us very tightly. I found them grown up. One would wake up and say to me 'But is it a dream?'. And the other: 'I'm happy you're back' ”. Balm for the heart.

Returning home meant for Marianna to recover a bit of normality. A walk in the park when she feels like it, the Christmas tree done together, breakfast before going to kindergarten. The war on her lymphoma isn't over. Unfortunately, her therapies are often changed because they only work partially. Finding drugs is not easy: they come from Switzerland or even the Vatican. Now the gaze is on Car-T, a therapy that she has paid off, but which she will probably have to do in France.

The collection on GoFundMe is still active (you can reach it by clicking HERE) and this mom still needs all of us. She needs us because she is young and because each of us could be in her place. Because she has to see her children grow again, celebrate their birthdays, scold them for disorder or a bad grade, rejoice in their victories and console them for their defeats. You must see them happy, in love, free, sad, impatient, disappointed. You have to help them strengthen their wings until they take flight on their own. She must continue to be who she is: mother, wife, daughter, sister, friend. Simply Marianna.

add a comment of Marianna, a mother against cancer