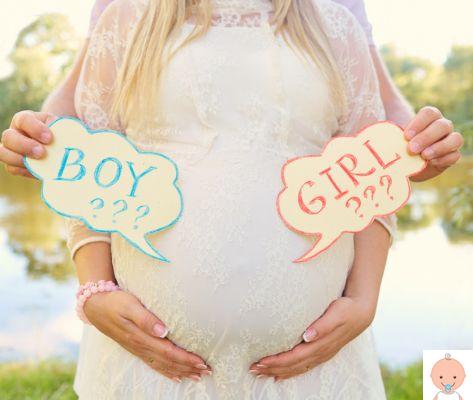 We know that there is no way to know in advance or predict the sex of the baby and that we will find out if one is on the way boy or girl only when we do themorphological ultrasound o amniocentesis. But that doesn't stop us from "playing" with bizarre and extravagant methods such as various calendars and tables. One of this is the Mayan calendar conception. Let's see how it works and what it might reveal to us.

12 ways to choose the sex of the baby

Rumors, legends, old tales and more: here are 12 ways to increase the chances of having a boy or a girl

How does the Mayan calendar of conception work?

The operation is very similar to that of other calendars of this type, which cross the data related to the date of conception and maternal data to give a result. In particular, the Mayan calendar examines two reference values:

Looking at the table just cross the box relating to the mother's age at the moment of conception with that of the month in which the child was conceived and the result will be obtained. The ♂ symbol in the light blue box will tell us that a boy is coming, instead the ♀ symbol in a pink box corresponds to the sissy. In principle, if the numbers relating to the age of the mother and the month of conception are odd, it is very likely that a girl is about to be born, on the contrary when one number is even and the other is odd, a boy will probably be born.

Is the Mayan calendar reliable?

According to the common opinion the Mayan calendar for conception is 85% reliable to predict the sex of the baby, but there is no scientific evidence to confirm the reliability of this tool.

It certainly remains one of the most used calendars thanks above all to the fame and mystery that characterizes the Maya civilization: famous for having introduced the concept of "zero" in the world, implementing the writing system, studying astronomy and also for having developed this system for predicting the sex of the unborn child based on the age of the mother and the month of conception, but developed by combining concepts of mathematics, astronomy and cultural beliefs.

Often the Mayan calendar is confused with the Chinese one and in fact they are quite similar: although the Chinese calendar is more popular and more used, in reality the Mayan table is much easier to use. Lancient Chinese table was found buried in a tomb near Beijing and, according to the data, would allow a prediction on the sex of the child, with an accuracy of up to 93%.

Another rather known method for predicting the sex of the baby is the lunar calendar.

A study, some time ago, wanted to investigate by enlisting some Indian couples between the ages of 20 and 40 and concluded that, during the full moon, there would be a greater chance of conceiving a boy, while to conceive a girl one would have to try conception. a few days before the full moon.

Even the Jonas method, widely used to avoid unwanted pregnancy but also to increase the chances of conception, uses the study of the different luanri phases in order to somehow predict the sex of the unborn child.

When is the sex of the baby discovered?

The only scientifically safe way to know your baby's gender is with a ultrasound examination. Of course, sex is established from conception: the sperm carries i XY chromosomes while the maternal ovum has i XX chromosomes. It is therefore clear that it is the sperm that somehow "chooses" the sex of the unborn child, depending on whether it will yield the X or the Y. If the sperm that fertilizes the oocyte will yield the Y-type chromosome that will join the X of the oocyte, a boy will be born (XY), if instead the X chromosome will yield then a girl will be born (XX).

But to really find out if a boy or a girl will be born we will have to wait for the outcome of the amniocentesis or the ultrasound of the 12th week, as long as the fetus is in the right position.

Audio Video Mayan Conception Calendar: How It Works
Changing the baby, how to choose a changing table and more ❯

add a comment of Mayan Conception Calendar: How It Works