Me Against You: the third film in the cinema 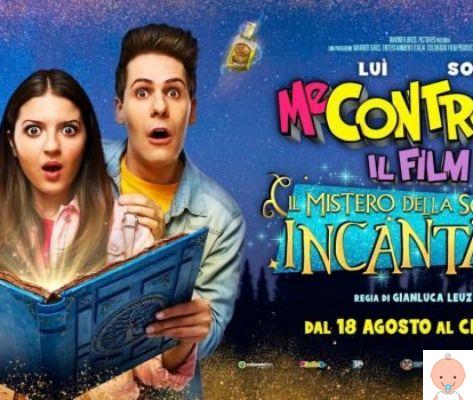 Me Against You: the third film in the cinema

Those who don't know Me Against You raise your hand! The famous Youtuber couple it is loved by children from all over the country, who have been following its events for some time now: gadgets, songs, school supplies, games ... He and Sophie practically everything exists, even films! And after the success of the first one, La Vendetta del Signor S, released only a year ago in 2022, Luigi Calagna e Sofia Scalia double success. The second is in theaters right now, while for the Me Against You the third film will soon hit theaters!

It was released on August 18, 2022 the second film by Luì e Sofì, and in a few days he climbed the charts, grossing hundreds of thousands of euros! Indeed, the film won the most successful debut title of the entire pandemic. Not bad, right?

Il second Me Against You movie tells of the inauguration of a school by the two protagonists, who are invited as guests together with Pongo, but soon it will be discovered that the institute hides a secret ... Obviously, there will be Mr. S who will try to ruin the party and destroy the friendship of Lui and Sofi forever: will he succeed this time?

Where to see the Me Against You movie

With the reopening of cinemas, the second film di Luì e Sofì is available in many cinemas! Multiplex, village cinema, open-air cinema… You just have to check the times of the room closest to your home. Just remember that to go to the cinema you need the Green Pass: children under 12 are exempt, but if you are not vaccinated you can take a swab up to 48 hours before the screening.

Read also: At the cinema with children

When the third Me Against You movie is out

As regards'release of the new film by Luì e Sofì, we will have to wait a little longer. The Youtuber couple so loved by children has announced the release of the film in August 2022, but Me Against You The Film - Lost in time, that is, the third volume of the saga, only the first will be released January 2022. With a press release, Luigi and Sofia thanked their fans who had been waiting for the second episode and who immediately crowded cinemas to see it.

Me Against You The film - Lost in time will it be the last?

For now it is not known whether Lost in time Sara the latest Me Against You movie. What is known for now is that it will be produced by Warner Bros and Colorado Film, and we are sure that we will again see our heroes, Luì, Sofì and Pongo, to clash with the wickedness of Mr. S. They will manage to defeat him once. for all? We just have to wait New Year 2022 to find out!

The new film of Me Against You is in the cinemas, you can already take your children to see it, while for the third film by Luì and Sofì it will be necessary to wait for the new year.

Streaks or highlights during pregnancy: can they be done safely? ❯

add a comment of Me Against You: the third film in the cinema