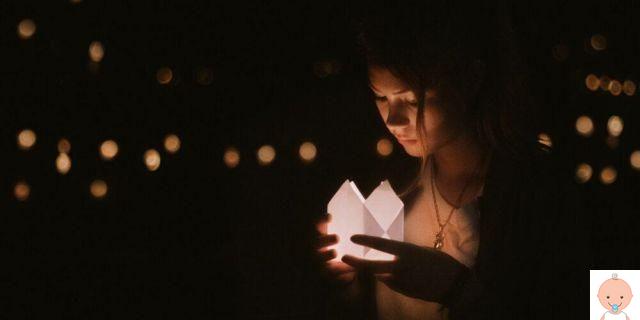 Two small words that go straight to the heart and hurt. Spontaneous abortion is the termination of pregnancy that occurs for reasons beyond the control of the woman by the 20th week of gestation (the opposite case is the voluntary termination of pregnancy which is decided, for various reasons, by a couple). Beyond this term, when fetal development stops, we speak of intrauterine death.

The period with the highest risk of miscarriage is the first trimester. From the second trimester onwards, you can generally relax a little more. Symptoms of a miscarriage are variable. Some women experience bleeding, menstrual pain, contractions. Others, on the other hand, do not even notice and the interruption is diagnosed during a routine check-up. On that occasion one often hears the dreaded phrase "Madam, I'm sorry: there is no heartbeat".

There are various forms of miscarriage. Let's see what they are and how they appear.

Let's start immediately with the good news: a threat of miscarriage doesn't always turn into a termination of pregnancy. We certainly cannot deny that it can happen, but in many cases everything is resolved positively, leaving only the memory of a great fear. If the gynecologist makes such a diagnosis, try to be confident: everything could be for the best!

The threat of abortion is the set of a series of conditions that risk losing the baby before the 20th week of gestation. The most frequent symptoms are vaginal bleeding and abdominal pain (similar to menstruation), which often also radiate to the kidney area and cause hardening of the belly. The losses can be of various colors (from pink to brown to deep red). Even the quantity varies from small spots on the panty liner to real bleeding.


The first thing to do is to contact your gynecologist or, if he is not available, to the obstetric emergency room for a check-up. Ultrasound is a very important test to verify the cause of the threat of abortion. For example, it allows us to see if an amniochorial detachment is taking place, that is, the detachment of the two tissues that form the placenta, the amniotic sac and the chorionic sac. However, it should not be confused with placental abruption which is a much more serious problem that can occur from the second trimester.

Most often, progesterone (by mouth, vaginally, or by injection) is prescribed to treat a threatened first-trimester abortion, the hormone that has the job of protecting pregnancy. In general, rest is recommended, although not always absolute: you have to take great care of yourself, avoid efforts or particularly heavy work. In the event of an abortion threat, sexual intercourse may be prohibited. In the second trimester, tocolytic drugs are used to block contractions. Sometimes it may be necessary to use a cervical ring, used to "contain" the pregnancy and avoid preterm birth.

Delay. A positive pregnancy test. The joy that springs from all pores. And then, after a very short time, the bitter surprise: menstruation arrives. What happened? A very common and unfortunately very common thing among women. It is biochemical pregnancy. Put simply, it is a very early miscarriage that often occurs within the fifth week of gestation, practically right away. Sometimes the woman does not even have time to take a pregnancy test and she simply thinks that her period has come a few days later than the expected date. However, if you have an irregular period, you can't calculate the delay because you don't really know when your period would come.


The causes of a biochemical pregnancy are no different from those of a miscarriage. When it stops, the symptoms are similar to that of the menstrual phase: malaise, stomach and headache, cramps. The flow may be a little more abundant, sometimes with clots. In reality, however, it is all very subjective and each woman is unique.

What to do in case of biochemical pregnancy? If you have already taken a test, the only thing you can do is check the progress of the HCG beta. When a pregnancy stops, their value progressively decreases, up to zero. It is important to verify that this happens to rule out that it is an ectopic pregnancy, in which the egg implants itself in a location other than the uterus.

A completely physiological start, with positive tests and beta HCG. The first symptoms of pregnancy that are felt, such as fatigue and nausea. Then, everything changes, there is some blood loss or the ultrasound shows something wrong. The little one is not developing where it should. An ectopic (or ectopic) pregnancy is occurring.

In ectopic pregnancy, the fertilized egg implants itself in a location other than the natural one, i.e. the uterine cavity, compromising the normal course of pregnancy. Ectopic pregnancy develops in the fallopian tubes, ovaries, abdomen, or cervix.

The causes are not fully known. Among the known risk factors we find previous ectopic pregnancies, smoking, maternal age over 35-40 years, fertility treatments. There are not always symptoms and the problem is discovered by chance when the ultrasound shows that the implant did not take place in the uterus. In most cases, however, there is blood loss, sometimes accompanied by abdominal pain. Sometimes the growth of the embryo inside the tube causes it to rupture. In this case the symptoms are very evident: severe bleeding, particularly severe abdominal pain, localized on one side, severe shock, fainting.


The majority of ectopic pregnancies end in miscarriage, especially when there is blood loss. In other cases, a drug (methotrexate) is administered which blocks cell growth and, consequently, also that of the embryo. It is used in the early stages of ectopic pregnancy, when there is no loss or pain. If the pharmacological approach does not work, if it cannot be adopted or if there is an emergency situation (for example due to rupture of the tube), surgery must be performed.

Extrauterine pregnancy has no impact on future fertility.

This condition takes various names: blind, clear, empty egg or anembryonic pregnancy. Have you ever heard about it? It is quite a frequent occurrence. Think it causes almost half of first trimester miscarriages.

When a blind egg occurs, conception occurs normally, the egg cell nestles in the endometrium, but the embryo does not develop. Generally, the causes are genetic and chromosomal abnormalities. The pregnancy test is positive because about 7-10 days after conception the body begins to produce the beta hormone HCG which is what makes the test positive. But it's not just the two lines on the test - even if the embryo hasn't developed, you may have some of the symptoms of pregnancy.

Ultrasound is the examination that allows you to clarify the situation without any doubt. If around the seventh week of gestation only the gestational chamber is seen, therefore without embryo and obviously without any cardiac activity, the gynecologist will schedule a check-up visit 7-10 days later. He might also suggest checking the trend of beta HCGs. At the beginning of pregnancy, if all goes well, they double every two days, while if something is wrong, growth is very slow or even stops. If nothing is seen on the next ultrasound, the diagnosis of egg blind will be confirmed.

Usually anembryonic pregnancy ends with blood loss and abdominal cramps, up to the complete "cleaning" of the uterus. When this does not happen or if there is heavy bleeding or an infection, medical attention should be sought. Sometimes scraping is needed.

You are probably wondering after how long it is possible to try to get pregnant again. Talk to your gynecologist. Usually 2-3 menstrual cycles are expected, but it is always advisable to seek expert advice.

A small clarification here is a must. A molar pregnancy is not a spontaneous abortion in the strict sense, but we decided to talk about it anyway because it is in fact a termination of pregnancy. Fortunately, it is a rather rare circumstance that occurs due to a genetic error at the moment of conception. That is, the egg is not fertilized correctly. The pregnancy begins, but it is destined to end.

The hydatiform (or vesicular) mole is a mass of abnormal cells produced by trophobastic cells, those that give life to the placenta. In other words, it is an exaggerated growth of the tissue that is supposed to form the placenta. The causes are not yet clear. However, it seems to happen more frequently to girls under the age of 20 and to women over 40.

There are two forms of molar pregnancy: partial and complete. In the first case, an embryo develops after fertilization characterized by the presence of an excessive number of chromosomes. There is therefore no possibility that it will grow and therefore survive. In complete molar pregnancy the embryo does not develop at all, while the placenta tissue grows abnormally, also causing the uterus to increase in volume. The ultrasound will show only the placental tissue, while the embryo will be absent.

If at the beginning the pregnancy seems to proceed in a completely normal way, at some point disturbances appear: vaginal bleeding, exaggerated growth of the uterus, severe nausea and persistent vomiting, high blood pressure, enlarged ovaries, levels of beta HCG higher than the woman's gestational age (especially in the case of a complete molar pregnancy). Diagnosis is made with an abdominal ultrasound. Treatment consists of emptying the uterine cavity. It can be done with drugs or surgically with a curettage. For some time the level of beta HCG is monitored: they must go down to zero.

Audio Video Miscarriage, what are the most common forms
Therapeutic abortion: everything you need to know ❯

Symptoms of ovulation, how to recognize them

add a comment of Miscarriage, what are the most common forms