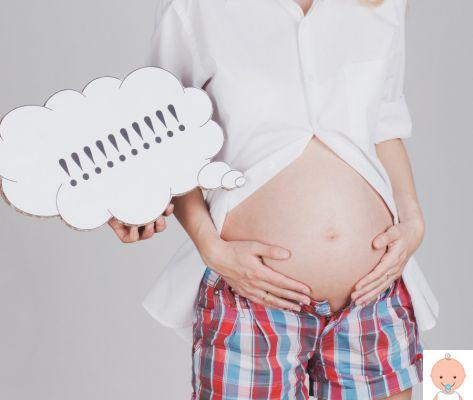 No one ever said it would be easy: during pregnancy and motherhood, joy is sometimes clouded by problems big and small, fatigue and unfavorable circumstances. In these situations - as always, after all - it is better to laugh than cry! This seems to be the philosophy behind the illustrations by Meghan Shah, young American mom who had the idea to summarize her life in pregnancy and later through funny comics.


The protagonist of the drawings is a funny character of her own invention "Mommie Poppins”: a sarcastic and irreverent mother, who tells with irony the various phases and typical situations of motherhood. The author has published her drawings on a Facebook page and her aim is to give parents a smile in the most frustrating moments.

Because motherhood is not everything 'Merry Poppins' e a good sense of humor is the only way to get away with it. This is alcohol.

Probably many mothers will recognize themselves in these drawings!

When people congratulate, I enjoy saying "for what?" and watch them whiten

Storing the strip of paper you peed on (for the pregnancy test) is the first of many disgusting things you will do as a mother.


If the babies in the belly really hear what we say, for sure their first word will be ca ** o

Crazy hormones and no alcohol. Interact with me at your own risk.

Compared to the videos they show us in the pre-course, Tarantino's films look like Disney's

To pee or not to pee, that is NOT the question. Pee.

I admit it, I put a hand on my stomach and made a face to make me give up my seat on the subway

I'm in that stage of pregnancy where people don't know whether to compliment me or give me a gym membership.

My parenting philosophy is to do the exact opposite of what my mother-in-law says.

In one day my chest swings between Pamela Anderson and James Franco.

I'm starting to think that the song "Hotel California" is about parenting.

It takes years of meditation to reach a mother's level of concentration while cutting her baby's nails!

If ever a friend of yours says they'd like to babysit, ask them to write it down and sign it in blood.

Measurement of the fundus of the uterus ❯

add a comment of Motherhood and pregnancy in Meghan Shah's comics