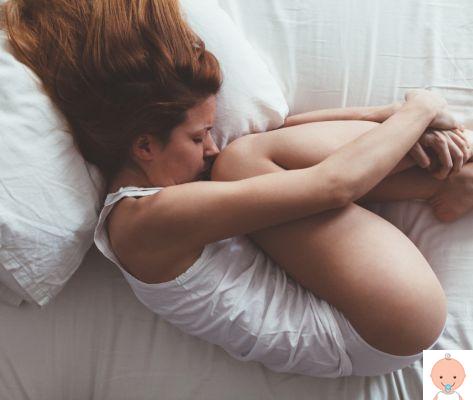 Medea's syndrome (the meaning of which is cunning, cunning) recalls femicide, that is 'I'll kill you because you abandoned me'. The trauma of abandonment is in fact particularly significant on the emotional level and in the case of Medea, a woman wounded in her pride because she was betrayed by her beloved husband Jason, manifests itself in all its tragicity, i.e. ratio and furor, mens and cupid: the jealousy leads to madness but the prevailing aspect is the indignation felt by a woman who no longer recognizes her being a mother.


The only way to cope with such pain and humiliation is precisely to take revenge on your own children, killing them.

Being a woman: what changes in the couple after childbirth

A woman who becomes a mother often loses or renounces her femininity to devote herself almost entirely to looking after her children. On the other hand, the man changes the way he observes his partner after her conception, a sense of protection arises in him, of modesty for which she no longer considers the erotic aspect of the relationship but the parental one. She too finds it hard to recognize in the man that she is in love with her. Very often after pregnancy, many couples stop having sex. The son takes the place of the father and the thought and concern is turned almost and exclusively to him.

Read also: The resumption of sexual relations after childbirth

In the couple confusion is generated, the dynamics change, from two to three, spaces and times change. You do not sleep, it is difficult to work, the stress increases. Motherhood is difficult and can produce anger, as on a personal level one loses the desirability towards one's partner who in many cases stops being present and, at some point, making love with her. It is not an unusual that many couples give up sexual intercourse during gestation even though the gynecologist has assured that there is no risk. The unconscious experience linked to sexuality changes both in the couple and in the single subject.


Being rejected as a woman, however, inevitably involves a demonization of inner experiences so much that children are seen as a threat. But as long as dedication, protection and acceptance persist, a balance will be maintained, even if precarious. The children, at times, will find themselves having to assume the role of comforter with those who have given up a part of themselves for their own good. But being only a mother in the eyes of your partner is not a consolation that gratifies everyone since the aspect linked to eroticism, conquest and falling in love tend to persist in the very man who made them parents.

In some situations, once she has passed the stage of motherhood, she almost immediately regains her feminine aspect, fully manifesting her being a woman. In other cases, that is, when this otherness is incongruent and conflictual, she finds it hard to be a good mother, welcoming and responsive to the needs of her baby.

A mother afflicted with Medea's syndrome, she cancels herself as a woman and as a mother. She cancels her children and her partner's offspring. It destroys the couple. A woman who does not accept her motherhood, he lives it with conflict, developing a deep anger that leads to infanticide. Many cases of the crime report report this type of pathology as a psychological condition:

LZ a 31-year-old woman kills her 8-month-old daughter by putting her in the washing machine. A woman's life is a succession of particularly tiring events from an emotional point of view, her psyche slowly suffers. From the beginning, the little girl's life is endangered, in fact, during labor, she ingests amniotic fluid, struggles to breathe and after a few days in the incubator, she is finally able to recover. Following this event, a family member of the woman to whom she was very attached dies and shortly after her child falls ill with bronchopneumonia. For L. it is the end, she falls ill. Inside, something no longer works, she does not know if she will be able to raise this little girl, to go back to being a mother after eleven years from her first daughter. Over time, her situation worsens, the psychiatrist recommends a drug treatment but all this is useless because the woman in the throes of auditory delusions and hallucinations, one morning, takes all the stuff placed on the chair and puts everything in the washing machine but it seems that did not realize that she had also slipped the little one into it (Picozzi, 2008).

A few years earlier, still in the town, two girls who had hidden the pregnancy from their parents, took the newborn baby and put it in the basket of the appliance. In 1987, in Detroit, a little girl pees herself and her mother as punishment puts her to wash in the washing machine. There are many psychological conditions that women experience during pregnancy and motherhood. Some border on psychosis and some even border on crime. In this case, establishing the ability to understand and want is the first step to more precisely ascertain the motivation, as well as the pathology, that is, what drives women to kill. Many of these situations are a consequence of the absence of a partner in raising children: in addition to having a parental role, the father

he affectionately nourishes his entire family and guards them by generating security, listening to and participating in all the activities that concern the growth and psychological evolution of all

When man does not fulfill his role, in not rare situations, mothers are led to continually ask for help and, consequently, to develop help seekers syndrome.. What does help seekers mean? 'Seeking help' and in this case the reference is aimed at women who continually refer to doctors because of diseases, pathologies or symptoms that arise in their children, and that they themselves cause, are representative of a specific request for attention.

Unlike women with Munchausen syndrome, in these the search for medical care is more sporadic, the induced pathology is less severe and is motivated by a specific need for support from medical staff in raising the child. Various scientific theories, authors and many others underline the importance of the presence of both parents in the care of the child and in the correct fulfillment of parenting in order to manage the long path that the growth of children entails.

Often in the face of overt pathologies there is a feeling of helplessness, believing that nothing can be done. In reality, every stressful situation that the woman encounters could be monitored with a greater presence on the part of the constituted family unit, in this case the partner, and of origin. Any kind of help and psycho-emotional support relieves fatigue and eases the condition of loneliness and isolation to which the mother is subjected during the post-gestational period. In these cases it is possible to intervene immediately without having to face dramatic situations. Furthermore spsychological support before, during and after pregnancy would be desirable because often the drug treatment is not enough to help the subject manage his problems.