Movies and DVD cartoons to see on Valentine's Day 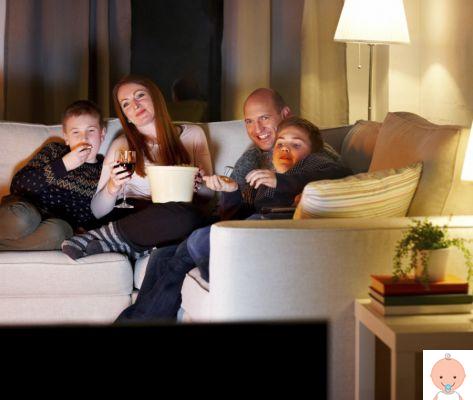 Movies to see on Valentine's Day with children

Valentine's Day with the family? Or as a couple on a quiet home evening? There are those who love to spend it even with the children and those who instead leave the little ones to their grandparents for an evening to spend it in two. If you have chosen to stay together, you could organize a movie night and watch a movie. Here is a selection of movies to see on Valentine's Day with children


In fact, the day of the party of lovers is not the most suitable occasion to snuggle up together on the sofa, prepare a "picnic" dinner with sandwiches, pizza and popcorn, and enjoy a good super romantic movie?

On Valentine's Day you can make a selection of love movies and maybe brush up on the great classics or new titles that are already part of the history of cinema.


Here are some ideas:

A film from several years ago that preserves the magic of love and fantasy intact. It tells the story of the servant Westley and his princess Bottondoro. Here a scene from the film - YouTube

This is also a somewhat dated film, but a wonderful Michelle Pfeiffer plays the role of a beautiful princess struck by a spell that transforms her into a hawk during the day. Nonetheless, she never separates from her beloved knight

Princess Giselle loves her Prince Edward but a terrible spell takes her to today's New York. Here the trailer - YouTube


A film from a few years ago with Drew Barrymore and Adam Sandler. Due to illness, she wakes up every morning and has forgotten everything about her, even the man who loves her. That so he decides to make her fall in love every day, again! Here the trailer - YouTube

A 2022 film with Bradley Cooper, Robert De Niroun and a nice and beautiful Jennifer Lawrence who won the Academy Award for this film. The story of Pat and Tiffany and their love born in a psychiatric institution and culminating on a dance floor.

Perfect to watch with your teenagers: The Twilight Saga tells the crazy and thwarted love story of young Bella and the vampire Edward. A global success, both for the books and for the films that have been drawn from it.

A great classic of cinema with Audrey Hepburn and Humphrey Bogart. He is a rich scion from a good family, she is the driver's daughter.

Cartoons to see on Valentine's Day

Animated features, especially Disney's, are full of love stories, and inevitably end in happy ending. Here are some suggestions

It is not the classic love story between prince and princess, but between a stray and a wonderful purebred dog. The scene of the restaurant el paeseno, when they eat a single piece of spaghetti together, is very romantic indeed. The scene from Dolce Sognar - Youtube

If you have male children at home, they will hardly accept to see a film of this type, but it is worth insisting because in Sleeping Beauty there is a brave prince who challenges dragons and brambles to be able to save his beloved Aurora. A scene on YouTube

Everything starts from the love story that lasts a lifetime and a shared dream that has not been able to come true. Heartwarming and super colorful

Here is another love story in which the desire to be with your loved one pushes you to face every challenge, even the most impossible and unites apparently incompatible worlds! The scene from Under the Sea - Youtube

Love goes beyond boundaries and appearances in this great love story in which Belle falls in love with Prince Eric turned into a monster by a spell.

Valentine's Day 2022: film in the cinema

On Valentine's Day we could also plan a romantic evening with pizza and movies at the cinema, leaving the children with their grandparents and giving the couple an evening of pure romance. Let's see what the programming is for these days on the big screen.

A reflection on human nature and intimate relationships. The story of three people seeking intimacy on an emotional journey within themselves. Out in theaters on 14 February.

A woman's coming-of-age tale set in Budapest on the eve of the First World War. An elegant and engaging mystery. At the cinema since 4 February.

The new film directed by Clint Eastwood who is also the protagonist. The film tells of an elderly floriculturist who ends up as a courier for a cartel of Mexican drug traffickers. At the cinema since 7 February.

Physiological phimosis and maneuver to "open" the willy: what to do? ❯