Mucous plug: what it is and how much is missing in childbirth when we lose it 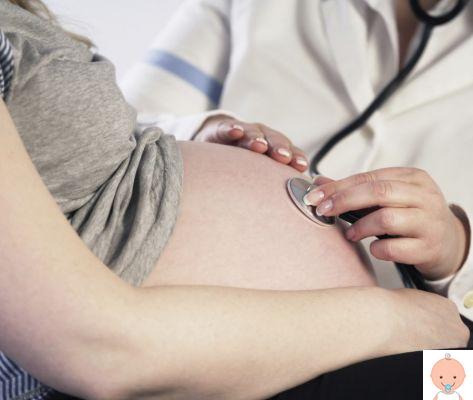 There is an event that can help us understand if labor is near; an event that they often tell us about but which is not so well known: loss of the mucous plug. Let's try to understand together what it is, how to recognize it and how to behave when we lose it.

The mucous plug, what is it

The mucous plug is a real concentration of "condensed" cervical mucus, a gelatinous substance which has the purpose of protecting the sterile uterine cavity, containing the baby, from the ascent of any bacterium or fungus. It is essentially ours natural protection against uterine infections which would be very dangerous for the pregnancy and for the baby himself. An infection, in fact, could cause premature birth, complications for the baby and also for the mother.

Video, Mucosal Plug Loss. How long is it to give birth?

When does it form and why?

The formation of the mucous plug already occurs in the early stages of pregnancy, under the hormonal push, the glands of the cervix (those that normally produce mucus even in the absence of pregnancy) are stimulated to produce a more dense and gelatinous mucus that slowly goes to physically "plug" the cervical canal isolating the uterine cavity. It is certainly a gradual but rather early process precisely because it is important to protect the sterile uterine cavity from the earliest stages of pregnancy.


The formation of the cork is not a process that we can perceive from the outside, for example with particular losses (otherwise typical of pregnancy). The abundant discharge that can occur during pregnancy is actually produced by the vaginal walls, so not the cervix.

Read also: How the uterus changes in pregnancy

Loss of the mucous plug, how can it be recognized?

We come to the crucial point, that is how do i recognize that what i have lost is the mucous plug? I can tell you that in several years of experience I have never had a mother who has not recognized him. And the reason is very simple: it really is very different from all the other losses you may have experienced, even those from Candida infection.

I will give you some practical examples, the most solid losses you may have experienced are those due to infections by different bacteria / fungi, they are usually creamy, of various colors but opaque. The mucous plug no, it is solid but it is gelatinous and basically transparent. On the contrary, the normal losses that can occur during pregnancy are liquid, sometimes so much that the question arises as to whether or not it is amniotic fluid.

To give you some more information I can say that it looks like a small pile of clear / whitish gelatin, that you are suddenly in the panties when we are more or less close to the time of the start of the birth.

Expulsion of the mucous plug, when to worry?

Once you have lost the mucous plug you just have to observe it, or ask for help from those who follow you during pregnancy. If you are pregnant (after the 37th week) in reality there are no major problems and the only alarm bell may be the actual presence of blood in quantity inside the mucus or that comes out immediately after the loss of the cap. In that case it is important that you go to the emergency room for a check-up. If, on the other hand, you are not at term of pregnancy, then before the 37th week, whatever the color, the consistency and regardless of the presence or absence of blood, contact those who are following you during pregnancy. In fact, it will be necessary to understand why the mechanism of labor has been triggered and if necessary, proceed to hospitalization to try to stop it and bring the pregnancy as close as possible to term.

Loss of mucous plug, how long is it before delivery?

We come to the crucial point, the one that actually interests mothers most, that is, once the cork is lost, how long is it before delivery? As often happens with the phenomena related to labor and childbirth in reality it is not known. That is, we cannot predict from there on when the contractions of the prodrome of labor will begin (the first contractions, the irregular ones that tell us that we are close to labor and delivery).

I have very different experiences in this regard and vary from person to person, that is, even in subsequent pregnancies it can change. It can be 3 hours as well as 3 days but also 2 weeks. We certainly know that with the loss of the mucous plug something has started to change and certainly not a month is missing. Let's say that on average after a maximum of 7 days, in my experience, the contractions of labor begin.

Loss of the cork is actually the first phenomenon (which we consider as a passive phenomenon, i.e. due to other bodily modifications) which tells us that we have come to an end. He certainly says this to us professionals but also to mothers, who, unless in particular situations, only have to think that soon they will see their baby after the very long journey of pregnancy. I recommend one more thing, if you have doubts about the characteristics of the mucous plug and if you happen to lose it before the term of pregnancy, contact those who are following you during pregnancy and / or the emergency room in order to be able to act in sufficient time to guarantee the safety and well-being of mother and child.

We can notice the color of the mucous plug only when, close to labor, we find a white-opaque or transparent gelatinous substance on the panties. We cannot see the mucous plug during a normal visit, for example, because it is "inserted" into the cervix and is completely invisible to us. Changes in the color of the mucous plug they may be due to the different composition of the substances contained in it but it never changes radically. However, it is possible that there are some inside traces of blood, due to the rupture of the small blood vessels of the cervix that occurs when the transformation phenomena of labor begin, in particular with the formation of the amnio-chorionic bursa, or that part of a "bag" containing amniotic fluid that separates the baby's head from the cervix and which, in most cases, breaks causing the so-called "breaking of the water". We can therefore say with confidence that if you should see red-pink traces mixed with the gelatinous substance that constitutes the mucous plug, you should not be alarmed, it is a physiological condition.

Presence of blood in the mucous plug

The presence of large quantities of bright red or dark red blood that come out of the cervical canal and that we find ourselves on the slip must set off an alarm bell. As we said previously, if the amount of blood is quantifiable as a few traces we should not be alarmed, it is part of the physiology of the phenomena that precede labor, but if the amount is greater it could be due to not very pleasant causes, to give some example a detachment of even minimal placenta, the rupture of a slightly larger placental vessel which causes hemorrhage… etc etc. In short, all this to emphasize that when you see blood of an intensity comparable to the third-fourth day of the cycle it is important to go to the emergency room to understand what is happening. Once the necessary checks have been made (usually it is an ultrasound to observe the positioning of the placenta and the state of health of the baby), if there are no particular elements that alarm the doctors, you can go home and wait for the development of the labor.

How long is it before delivery after the loss of the mucous plug?

Certainly the loss of the mucous plug is a clear signal that delivery is approaching: labor may begin shortly, but it may take a few weeks before birth. The cap can break up to six weeks before delivery.

When does the waters break after when you give birth?

The rupture of the water in most cases occurs when labor has already begun: the cervix sidilates and this tension causes the membranes to rupture. So a break in the water indicates that labor has begun and you need to go to the hospital. The duration of labor cannot be predictable.

How is the mucous plug?

The mucous plug is a whitish gelatinous or watery material. It is also common to notice the presence of light streaks of blood which are caused by the rupture of the capillaries caused by the beginning of the uterus expansion.

What does it feel like with the loss of the mucous plug?

You feel a vaginal discharge of gelatinous fluid, which can range from whitish to yellowish, and is not a symptom of onset of labor or imminent delivery.

How to recognize contractions?

Mucous plug: what does it mean when it is white, yellow or brown ❯

add a comment of Mucous plug: what it is and how much is missing in childbirth when we lose it