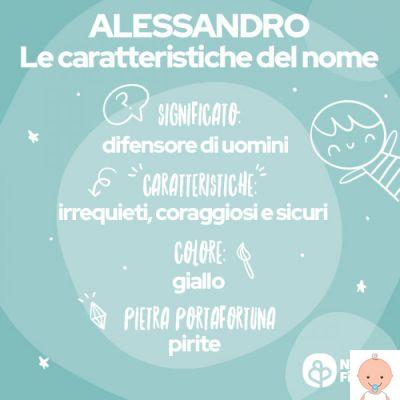 Among the masculine names most appreciated by parents, the el paeseni, Alessandro it's a name for child of noble and ancient origins that remains, year after year, at the top of the rankings of the most popular names in the country. Let's discover the origins, the meaning, the curiosities about this name and the personality of Alessandro.

Origins and etymology of the name Alessandro

Alexander derives from the Greek Alexandros, composed of the terms alexo, "defend", "help" and aner "man". It is therefore a compound name of ancient origins that was imposed on people in history who became very famous, such as Alexander the Great, conqueror of the Persian Empire.

Meaning of the name Alessandro

Recalling the meaning of the two Greek names that compose it, Alexander can mean "the man who helps", or "the one who defends" or, again, "protector of men".

Spread of the name Alessandro

As we said, this name is among the most loved by new parents and the townspeople and for years it has been at the top of the ranking of the most common baby names: according to ISTAT data in 1999 9.000 babies were called this way while in 2022 6078 babies were called Alessandro . Currently the name is al second of the top ten of the most loved names immediately after Francesco.

Personality of a child named Alessandro

Alessandro has an open, sociable, cheerful character and certainly has a very welcoming and captivating personality charismatic. He hardly isolates himself and feels uncomfortable, indeed he manages to be at ease in any environment and context: he is talkative and communicative, acute and insightful.

E' curious of everything, even if one of its limits is that of not always being able to carry out its projects and not being able to get to the bottom of things. At times, therefore, it seems superficial.

Rather disorganized and messy, certainly has the primacy of charisma and positivity.

Likes to have fun, communicate, express. He likes activities to do in groups and also in public. In love he is sensitive, tender, emotional and generous, he hardly gives in to temptation and risks being very jealous.

What profession will Alessandro make? He will probably be very attracted to the professions in the commercial sphere, in contact with the public, from the legal, social or medical professions, but also from writing and gastronomy.

The sign of the Fishes it is the one most associated with Alexander's personality above all for their cheerfulness.

Alessandro's lucky color is green, the dominant color of nature, life, well-being. Symbol of luck and hope, green gives a feeling of relaxation and joviality.

Alexander's lucky stone is it Emerald, which has always been considered a talisman against evil and capable of counteracting stress and tension.

Alexander's lucky number is 8 which refers to the material but also spiritual well-being that all men aspire to.

"Alessandro and the sea"is a famous song by Roberto Vecchioni, contained in the 2009 Milady album:

as he turned back

he had nothing to see;

and as he looked ahead

nothing to want to know;

but the time of a lifetime

it wasn't worth that single moment

Alessandro, so big on the outside, so small on the inside.

add a comment of Name for child: Alessandro. Origins, meaning and curiosities