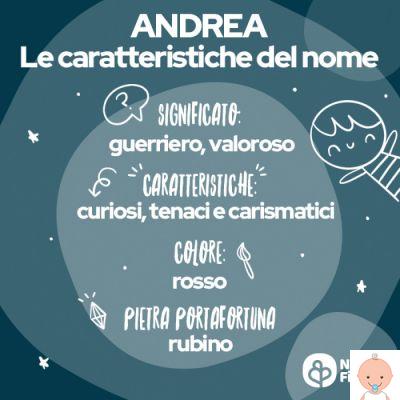 Andrea it's a name precisely masculine, which can also be declined in the feminine and is one of the most loved and widespread names in the country for several years. Let's find out together the origin, meaning and curiosity about the male name Andrea.

Andrea celebrates his name day on 30th November on the occasion of the memory of Saint Andrew the Apostle, brother of Saint Peter.

Origins and etymology of the name Andrea

The origin of the name is Greek: Andrea derives from the name Andreas, derived from andros, in reference to masculinity. But it can also be connected to the term andreia, which indicates virility, strength, valor.

Meaning of the name Andrea

In any case, the meaning of the name can be traced back to the idea of ​​"male" and masculinity as opposed to femininity (in Latin the equivalent is vir, viri), as well as virility and masculine strength.

Spread of the name Andrea

Widespread in pagan circles and also in Christian circles, especially during the Middle Ages, Andrea is one of the most loved and widespread male names in recent decades, even if it has suffered a decline in popularity: according to ISTAT data, 1999 children were called Andrea in 10.336 while in 2022 the number dropped to 6.047.

In any case, Andrea has been in the top ten of the most popular male names for many years and in 2022 he was al sixth place of the ranking.

The variant female Andrea's has been in use only since the twentieth century, especially in Anglo-Saxon countries, because in the country it was not possible to call a girl that way except by adding a distinctly feminine middle name.

Personality of a child named Andrea

Andrea may appear at first sight reserved, cold and sometimes a little strange, but this one independence it is only superficial because on an emotional level it needs to be loved and supported.

Home, family, love are very important for him and guarantee harmony and balance.

Its apparent confidentialityin reality, it hides a stormy and impetuous personality, at times it can have excesses of anger, brief but really eccentric.

What he seeks most is to be able to do what he wants when he wants and be who he wants.

He can seem a bit lonely and misunderstood at times, and despite his charm, he can sometimes feel not really appreciated by those around him.

Andrea is a idealist which needs to be appreciated in its proper value and the more he feels loved and supported, the more he will give the best of himself. His perfectionism pushes him to be very demanding in the selection of friends and affections.

What profession will Andrea do? He will be attracted to all super professions specialized, as an engineer or technician, and those related to psychology, religion, spirituality or those that will allow him to fully express his talent artistic and creative.

The zodiac sign that is most closely linked to Andrea is that of Sagittarius: independent, energetic, combative, but also impulsive.

Andrea's birthstone is the ruby, which gives great self-esteem, energy and passion.

Andrea's lucky number is 6. For the people associated with this number, always in search of well-being and physical and mental balance, it is very important to have family and loved ones next to you.

A famous song by Fabrizio De Andrè was dedicated to Andrea, celebrating a thwarted and tragic love, but also a piece by Anna Tatangelo entitled "Andrea"

Baby names that start with the letter A.

If you like baby names that start with the letter A, here is a list of the 10 most beautiful names to give your baby:

Andrea, the most common name in Florence

According to the demographic focus of the August Statistics Bulletin of the Municipality of Florence, Andrea is currently the most common name in the Tuscan capital because 5.190 residents are called this way as of December 31, 2022.

add a comment of Name for child: Andrea. Origins, meaning and curiosities