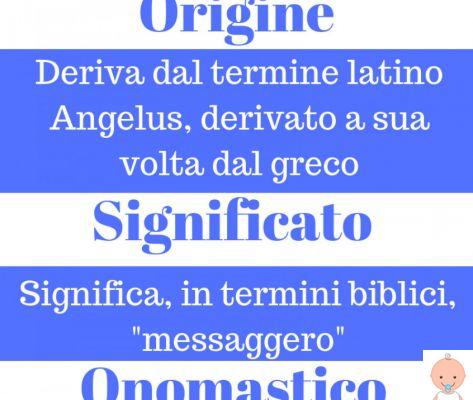 Angelo is a male name of Latin (and before that Greek) origins which has always been very popular in the country. We discover in this guide the origin, the meaning, the curiosities of this name for child.

Many saints and blessed bear this name, therefore the name day can be celebrated on different dates, such as:

Origins and etymology of the name Angelo

Meaning of the name Angelo

The meaning of the term Angelus in biblical terms is "messenger"," Nuncio "and is therefore used to indicate all those figures who are messengers of God, precisely the angels.

Diffusion of the name Angelo

In the village the name Angelo was very popular throughout the twentieth century. According to ISTAT data, it was the seventh and eighth most popular name in our country for the whole century. Nowadays it is chosen less and less and in fact it currently ranks 31st in the ranking of the most popular names in the country, but remains very popular in some regions such as Lombardy.

Personality of a child named Angelo

Angelo has a sociable character and loves to make new friends and acquaintances He is distinguished by his contagious good humor and his enthusiasm. He's always full of energy, he is simpatico, spontaneous and has a strong personality. He loves listening to others, being available to help, he likes to feel useful. It easily adapts to new contexts and new people.

However, sometimes his proverbial good humor can leave room for a profound melancholy which can make him appear evasive and selfish.

In any case Angelo is gifted with a great one intelligence which allows him to interpret the different situations he has to face and make the best decisions. In friendship and in love he is affectionate. He is passionate, faithful and attentive and likes to give his all to invest in a relationship that convinces him.

What profession will Angelo make? Thanks to his extraordinary communication skills he will be able to excel in the fields of teaching, journalism, but also in those that require great empathy and energy.

Like those born under the sign of Cancer, Angelo has a strong, energetic and chlorinated personality but at the same time extremely delicate. He is kind, generous, but advances slowly and only when he feels safe.

Angelo is associated with color blu: symbol of freshness, like the aquatic element to which it is linked, but also the color that evokes truth, transparency and clarity.

Il citrus is the stone associated with the name Angelo, a gem that can be naturally yellowish or pale blue in color and which is an important stimulus for clarity and calm

Il 5 it is Angelo's lucky number, a symbol of new departures and changes as well as the desire to explore.

We cannot fail to dedicate perhaps the most famous song by Angelo Branduardi to a child who has just been born and who has been called Angelo: The cure.

I'll protect you from the fears of hypochondria

From the injustices and deceptions of your time

From the failures that by your nature you will normally attract

I will relieve you of pain and mood swings

From the obsessions of your manias

I will overcome the gravitational currents

Space and light to keep you from getting old ...

Baby names that start with the letter A.

If you like baby names that start with the letter A, here is a list of the 10 most beautiful names to give your baby:

add a comment of Name for child: Angelo. Origins, meaning and curiosities