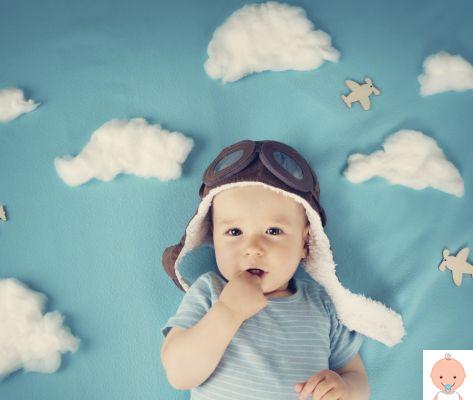 Still quite widespread throughout the peninsula, Cesare is the "Roman" male name par excellence and brings to mind great leaders and emperors. Today we discover in this guide the origin, the meaning, the curiosities of this name for child.

The name day is generally celebrated on 10th December in memory of Saint Caesar or Cesario, one of the seventy disciples, bishop of Epidamno and martyr.

Origins and etymology of the name Cesare

From the etymological point of view the origin of the name Caesar is still controversial. Surely the name Cesare spread in the Renaissance period, taking back the surname of the great Roman leader Gaius Julius Caesar (in Latin Caesar). According to some, the term Caesar, which at one point became synonymous with "emperor"would have an Etruscan origin.

Meaning of the name Caesar

The meaning of the name Caesar can be interpreted as different ways: originally Etruscan and Latin, it can be traced back to some Latin terms such as caesaries (which means "hair", and therefore in a broader sense it indicates a" person with a lot of hair ") and as caesus (which means cut, hence"Caesarean section", which would refer to the way in which Caesar was born). But according to other sources among the Etruscans Caesar meant"great, divine".

Certainly its best known meaning is "emperor", because after the exploits of the great Roman leader Julius Caesar - who together with his Julius Caesar Augustus dominated the Roman Empire - the term Caesar went to indicate the emperor (also Zar, in Russia, means Caesar, as does the German Kaiser).

Diffusion of the name Cesare

In our country, Cesare is still quite widespread, especially in Lombardy and Tuscany, while in Puglia his patronymic Cesario is more widespread, hence the female variant Cesira.

In el country, according to ISTAT data relating to the most common names, in 1999 185 children were called Cesare, while in 2022 the absolute value reached 495.

Personality of a child named Caesar

Caesar has a good character, balanced and gifted with great willpower. He is able to remain lucid in the face of any evidence, he knows how to affirm his presence and is always ready to defend the causes that are dear to him.

Cesare also has an explosive joy of life and an unshakable serenity, he is just, upright and respects his principles of life. He is a man of his word who always tries to keep his promises. He appreciates family and friendship and recognizes their value.

He is endowed with great psychological strength that helps him overcome failures, and at the same time his wit allows him to move forward by looking at what is happening in the right perspective. He has an approach pragmatic he prefers to rely on when he has to make important choices, has an analytical intelligence and prefers to lead a stable and balanced life: his taste for risk is wisely combined with a certain caution.

What profession will Cesare make? Family life will have a great influence on his choices, however he can be gratified by professions in the medical-social field, in justice, in art, but also in cooking and all professions that require meticulousness.

The astral sign associated with the name Caesar is Aries, like him fast, energetic, he always maintains lucidity.

The color that best expresses Cesare's personality is green. The color of nature that symbolizes its attachment to human values, good humor, balance and optimism.

The precious stone of Caesar is the ruby and refers directly to the Roman emperor Julius Caesar. This very precious stone symbolizes victory, happiness and love and is a reflection of Caesar's balanced character.

Caesar's lucky number is the1, a symbol of the beginning, is associated with a strong spirit of decision and initiative.

add a comment of Name for child: Cesare. Origins, meaning and curiosities