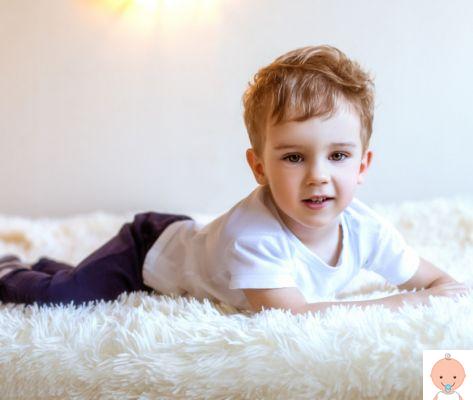 Cristian is a baby name which has had great fortune in our country in recent decades and is always enjoying growing popularity. It is a variant of the male name Christian, which has origins in medieval Latin. Let's see in this guide what is the meaning of this male name and what are the character traits of the people who are called Cristian.

Traditionally, Cristian celebrates the name day on 7th April when the Church remembers Saint Christian or Chrètien, a priest in the parish of Saint'Albin in Douai, France. He is the patron saint of pregnant women and is venerated in various places on the Monday after Easter. However, there are numerous saints and blessed who call themselves Christian, for example you can also celebrate November 12 and 22 in honor of San Cristiano martyr and blessed Christian or Christian d'Auxerre.

Origins and etymology of the name Cristian

The name Cristian (and Cristiano, from which it derives) originates in the medieval Latin term Christianus, which in turn derives from the Greek 'Kristós' or 'Christós' - the Greek adaptation of the Hebrew 'mashīáh' that is the anointed o the elect - and then later rendered in Latin as 'Christus'.

Meaning of the name Cristian

The meaning is quite clear since Cristian derives from the Latin Christianus which literally has a very specific meaning and that is "Christian"," belonging to Christ "," follower of Christ ".

Video: Meaning and peculiarities of the name Cristian for children

Diffusion of the name Cristian

The name found wide diffusion from the Middle Ages onwards, it was brought by several kings of Denmark. A curiosity: in England until 1800 the name Christian was mainly female, and it was a vernacular form of the name Christiana. In the village the variants Cristian and Christian far exceed the original name Cristiano: in 2022 Cristian was among the first thirty names most popular in the country and continues to enjoy great popularity among new parents.

Personality of a child named Cristian

Cristian (as well as Cristiano) loves to discuss, debate, talk and is a great communicator. He willingly shares his ideas about him and loves to learn new things through comparison with others. AND' curious and he loves to cultivate himself, always finds new interests and has an innate one predisposition to learning, although it may seem a bit superficial at times and seem to have a tendency to jump too easily and abruptly from one topic to another.

Sometimes he prefers to talk about himself and manifests a certainty inability to listen. With friends and family he is a warm and affectionate person, available and present, he loves to be a point of reference and in the family he seeks serenity and stability and it is from the people he loves that he draws the necessary strength to face the daily difficulties and challenges that life places in front of him.

Cristian is against standards imposed by society and loves free and independent women.

What profession will Cristian make? It could be a great one teacher because this assignment allows him to transfer his knowledge and his way of seeing the world to new generations. But he also has a passion for new technologies and could, therefore, be a very good one computer or programmer.

Like all the Ram, Cristian is enthusiastic and outgoing and loves living with people who don't impose too many rules and love freedom. He is impatient and can't wait when he wants to reach a goal, he never postpones a task or a commitment. Plus he's a real one leader, loves to take matters into his own hands and firmly believes in his abilities.

Cristian's color is White, a symbol of righteousness and loyalty.

Cristian's amulet is represented by the Diamond, whose name derives from the Greek Adamai and means "indomitable". The diamond is a symbol of strength and courage and is the stone of the winners.

Cristian's lucky number is 2: a symbol of participation and intimacy, but also of commitment to loved ones.

In the Christian variant

We offer you a piece played on the piano of clear Christian inspiration, a sweet music to be dedicated to children who are called Cristian.

add a comment of Name for child: Cristian. Origins, meaning and curiosities