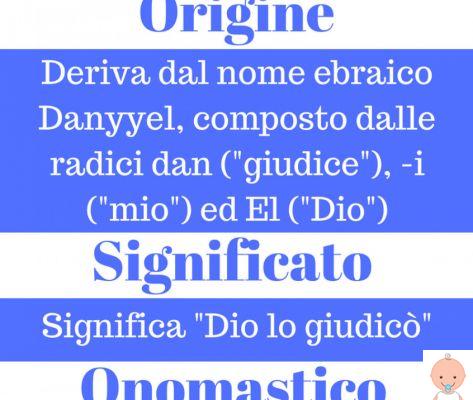 Danilo is a variant of the male name Daniele which in recent years has been increasingly appreciated by el country parents and is among the XNUMX most popular names in the country. We discover in this guide the origin, the meaning, the curiosities of this name for child.

Danilo celebrates his name day on 10 October, the day on which the Church remembers two saints named Daniel: St. Daniel Comboni, missionary and bishop of Khartoum, and St. Daniel, a religious and martyr with other companions in Ceuta under the Moors. But it can also celebrate on other dates, such as July 21 in honor of St. Daniel, prophet of the Old Testament.

Origins and etymology of the name Danilo

Daniel comes from the Hebrew name Danyyel composed of the roots dan ("judge"), -i ("mine") and El ("God"). The variant Danilo originates in the Slavic form of the name Daniel.

Meaning of the name Danilo

In the Old Testament the prophet Daniel was a minister of the Babylonian sages to whom he interpreted dreams: the story tells that he managed to escape the lions' den where he had been thrown out of envy. "God judged him" good and hence the original meaning of his name.

Spread of the name Danilo

Both male and female, in the different variants, Daniele has been one of the most popular names in the country for many years. According to ISTAT data, the name Danilo was chosen, in 1999, by 587 new parents, while in 2022 this number dropped to 163. The name Daniele was different, however, which in 1999 was given to 3334 newborns, and in 2022 was chosen by 1593 new parents.

Personality of a child named Danilo

Danilo is a man charming and pleasant, is sociable and easily adapts to all situations. He is a lovable and tolerant man, open-minded and very understanding. Although Danilo always seems to good mood, deep down he is particularly sensitive: he does not like to complain and does not want to bore his friends and family with his problems. For this he prefers to suffer in silence and face his demons alone.

Danilo is a idealist and he longs to live in a world of peace and harmony, so he does his best to build a better world. Danilo is great sentimental, and is a curious person who wants to know and know everything. He loves to cultivate himself and improve himself and is also constantly looking for material security. He wants to live in a safe and peaceful environment and wants to give certainties to his family, which is why he does not hesitate to work tirelessly. Monotony kills him: he needs to change and face new experiences.

What profession will Danilo do? Danilo is a perfectionist, he is demanding both in private and professional life and he wants things to be done in the best way. He will find satisfaction working in the social field, helping others but also in commerce, public relations and the world of media.

Danilo's personality resembles that of the natives of Cancer: he needs comfort, loves being with his family and does everything to make his dreams come true for himself and for his loved ones. He is kind and very sensitive, he can't stand criticism but proudly tries to hide his weaknesses behind his smile.

Danilo is associated with the yellow, a symbol of warmth and joie de vivre. This color also evokes knowledge and friendship.

Danilo's amulet is the Topaz, a stone that symbolizes goodness and originality and brings well-being and courage to the wearer.

Danilo's number is 9: symbol of completeness, it favors intuition and the ability to create.

We offer you a song by Danilo Sacco, voice of the I Nomadi group for twelve years, entitled L'Aurora, from the album Un Altro Me

add a comment of Name for child: Danilo. Origins, meaning and curiosities