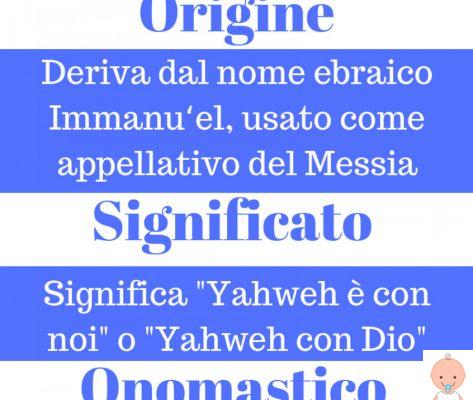 Emanuele is a masculine name much appreciated by the elf's parents and which has enjoyed particular success in recent years. We discover in this guide the origin, the meaning, the curiosities of this name for child.

Emanuele celebrates the name day on 26 March when the Church remembers Saint Emmanuel martyr with Saint Theodosius and Quadrato in Anatolia. Those who bear the name Manuel, on the other hand, can celebrate June 17, in memory of St. Manuel, martyr with Ishmael and Sabele in Chalcedon.

Origins and etymology of the name Emanuele

Emanuele comes from the Hebrew name עִמָּנוּאֵל (ʼImmanuʻel), which means "Yahweh is with us". The name was used by the prophet Isaiah to indicate the Messiah and later in the Gospel of Matthew it is used as the name of Christ the Messiah.

Meaning of the name Emanuele

The Hebrew and Bible meaning of the name Immanuʻel is, therefore, "Yahweh is with us", where most scholars translate" Yahweh with God. "Hence the interpretation that Emmanuel is also a name of Jesus.

Diffusion of the name Emanuele

The name Emanuele is particularly widespread in the Iberian Peninsula, also in the Manuel variant, as well as in the country where both Emanuele and Manuele have always been very popular. According to ISTAT data, in 1999 Emanuele 2693 newborns were called, while in 2022 this number dropped to 1876.

Personality of a child named Emanuele

Emanuele has an extremely spirit deep and passionate, he often asks himself existential questions and is particularly prone to introspection. He likes to think, ask questions, reflect and appreciate moments of solitude to meet himself and reflect. He has a nature pragmatics and a certain critical spirit that pushes him to be skeptical and to investigate issues thoroughly before making decisions. He never makes decisions lightly and prefers to trust his own insight.

Emanuele is deciso, motivated, he is not afraid of failure because he usually engages strongly in his activities and ends only when he has achieved satisfaction. He likes to hone his analytical skills and thanks to his extraordinary listening and observation skills manages to fit perfectly into the community and to be an active and constructive member.

Emanuele is adventurous, loves to travel and have new experiences. She seduces with her eloquence and her charisma. She has an active mind that loves analyzing, learning, expressing herself and does not hesitate to use her charisma to make herself loved.

Apparently Emanuele may have acold air and a bit severe but he is animated by a profound sense of justice and great humanity. It is deeply bags he is sensitive and has a great sense of responsibility that encourages him to honor his promises.

What profession will Emanuele make? It can be stimulated by many interests, from sociology to religion from ethnology to anthropology, up to the technical and technological fields.

Emanuele's zodiac sign is that of Virgin, perfectionist, active, authoritarian, but also characterized by great seriousness and intellectual acuity. Like Emmanuel, the natives under the sign of the Virgin are selfless and have a great spirit of sacrifice.

L'Orange it is the color that best defines Emanuele's character and personality because it reflects activity, optimism and communication.

The precious stone attributed to Emanuele is lo sapphire, symbol of fidelity and sincerity. A stone capable of awakening understanding and developing analytical skills.

Emanuele's lucky number is 3: associated with optimism, the ability to involve others in their projects and extremely cordial.

We want to offer you a song by the pop artist el paeseno Emanuele Fasano: a young panist who made shows in the stations and who became a viral phenomenon in the last Sanremo Festival with a truly exciting piano performance.

add a comment of Name for child: Emanuele. Origins, meaning and curiosities