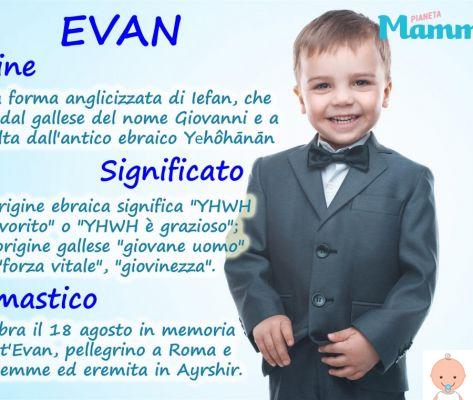 Evan is a male name that is not very common in our country but which has an ancient origin and which can please new parents who prefer foreign names, but still with a great tradition. Let's see in this guide what the meaning of this name is and what are the character traits of the people who are called Evan.

Evan's name day is celebrated on August 18th in memory of Saint Evan, a pilgrim to the city and Jerusalem and a hermit in Ayrshir. But you can also celebrate June 24, when St. John is remembered, of which Evan is a derivative.

Evan is itself an Anglicized variant of the name John.

Origins and etymology of the name Evan

The name Evan is an Anglicized form of Iefan, itself the Welsh form of the name John. The name Giovanni derives from the ancient Hebrew Yəhôḥānān, which means "YHWH has favored" or "YHWH is graceful".

Meaning of the name Evan

The name Evan could therefore mean "YHWH ha favorite" or "YHWH is graceful", but since it is a Welsh form of the name it may also have been influenced by other terms, such as the term ieuanc, which means "young man"or the Celtic word yowanko, which means" life force ","youth".

Spread of the name Evan

Rather common in Anglo-Saxon countries, where it has enjoyed increasing popularity over the past decade, the name Evan is certainly less common in the country. According to the data collected byISTAT in 1999 they were called Evan less than five childreni across the country, but by 2022 this number had risen to 111, which demonstrates the growing appreciation by parents and villagers for both foreign names that give this name in particular.

Personality of a child named Evan

Evan is sincere and gifted with a profound sense of justice, therefore, hates iniquities and is unlikely to be overwhelmed. He knows how to ardently defend his beliefs and loves to mediate and find a compromise that allows everyone to reach harmony, even in justice. Very brave and determined, he is far-sighted ed optimistic, does not like to mull over the problems of the past, but rather goes further and further towards the future to achieve his goals. Evan is a perfectionist who aspires to social success, but always keeps his feet on the ground, is smart and bright and is passionate about everything he does. He does not stop working to seek happiness and success: at first glance Evan can appear a bit of a person. egocentric and inaccessible, but in reality behind this appearance hides a kind, sociable and pleasant man. A superficial insensitivity, therefore, conceals a generous and lovable personality. Evan exudes good humor, loyalty, friendship, and doesn't hesitate to share his joie de vivre with the people he loves. He dedicates himself to his loved ones and constantly seeks affection and tenderness, which are fundamental for him to be able to best express his potential.

What profession will Evan do? It is probably intended for one career excellent in business, politics or large corporations.

The sign that resembles Evan's personality is that of the Gemelli. Of a cerebral nature, the one born under the sign of Gemini has a lively intelligence, an ingenious nature, joie de vivre and optimism.

Evan's color is yellow, a symbol of the sun and joy, but also linked to ambition, success and friendship.

Il Diamond represents Evan's temperament. It evokes perfection and purity, and is a symbol of strength. The diamond is associated with a strong and courageous personality just like Evan.

Evan's lucky number is 3, which represents the ability to communicate and sensitivity and evokes his great ability to resist obstacles.

We offer you the song "(This Is) The Dream of Evan and Chan" by Dntel, American electronic musician, in Superpitcher Kompakt Remix.

add a comment of Name for child: Evan. Origins, meaning and curiosities