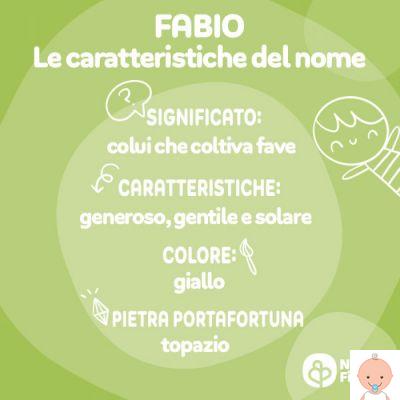 Widespread until a few years ago in the country, Fabio is one of the less popular male names by now but which retains an ancient and at the same time contemporary charm intact. We discover in this guide the origin, the meaning, the curiosities of this name for child.

Fabio celebrates the name day the11 mayor when the Church remembers the figure of Saint Fabio, a martyr in Sabina together with other Christian companions. But the name day can also be celebrated on the following dates:

Origins and etymology of the name Fabio

The names Făbius and Fabia continue the Latin name Fabius (Fabia) and are used in the ancient city to refer to the components of the Fabia, who according to legend descends from a son of Hercules. It is therefore a patronymic name.

Meaning of the name Fabio

In the ancient city, many families derived their name from the type of crops they used to dedicate themselves to. Examples are Lentuli, from lentes, lentils, or Pisoni or Ciceri (like Cicero). So we can assume that the meaning of Fabio is linked to the cultivation of broad beans.

Diffusion of the name Fabio

According to ISTAT data on the most popular names in the country, Fabio is currently much less widespread than in the past. In 1999, 2275 newborns were called this way, while in 2022 there were only 547. Today this name is not among the top 50, while in 1999 it occupied the 29th place.

Personality of a child named Fabio

Fabio is a man calm and reserved, rather character phlegmatic which often gives the impression of being detached and distant. In reality he is a simple, shy man who often doubts his abilities and tries above all to defend himself and protect himself, but when he feels confident becomes more open. He is certainly an honest, conscientious man with great moral qualities. AND' stable, persevering, disciplined and with great self-discipline, however, he has a tendency to become pessimistic, withdrawn and insecure. He is a person susceptible who prefers the most authentic and profound aspect of people and the reality that surrounds him. Sometimes Fabio can appear arrogant and proud, to the point that he hardly asks for help from others and prefers to do it alone. Fabio is, therefore, pragmatic, rational, practical. He's a perfectionist and a hard worker, endowed with a strong sense of logic and obsessions of order. He can often seem too wise, suspicious, little inclined to adventure, and he certainly has a deep sense of duty. Fabio loves the nature, simplicity and seeks first of all safety in loved ones and in work.

What profession will Fabio do? He will be attracted above all by the medical profession, but also to someone linked to law, the judiciary, safety and will not disdain a profession that can bring him into close contact with nature.

Il Lion is the zodiac sign of Fabio: vain, but also extremely generous and loyal.

Il yellow is the color associated with Fabio, the symbol of joie de vivre and energy, as well as altruism.

Il topaz it is Fabio's lucky stone, which refers to the idea of ​​generosity and nobility of soul, but also of honesty and deep conscience.

L'1 is Fabio's number, linked to his desire for self-affirmation and the realization of his own personal safety.

add a comment of Name for child: Fabio. Origins, meaning and curiosities