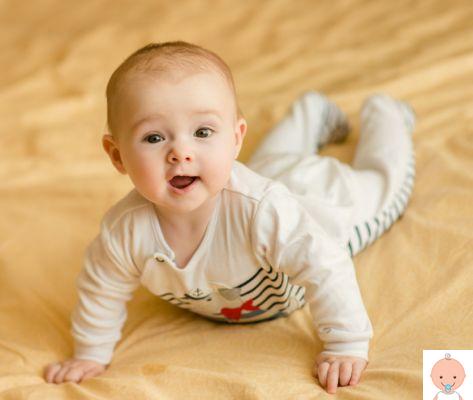 Male name of Germanic origin, Federico it was the fifteenth most popular name in the country in 2022 and is undoubtedly more and more appreciated by the new parents and the villagers. We discover in this guide the origin, the meaning, the curiosities of this name for child.

Origins and etymology of the name Federico

The origin of the name is Germanic and derives from the term Frithurik, composed of the terms peace (or fried, frithu, "peace") and ric (or rik, rikja, "ruler", "king", "lord", "mighty"). In our country the pronunciation of the name Federico is more modern, in fact in ancient times it was more commonly pronounced Frederico, adaptation of the Latin name Fredericus.

Meaning of the name Federico

The meaning of the name is enough uncertain. The possible interpretations of the name of Germanic origin are:

However, the modern variant Federico, which has gradually supplanted Frederico, probably suffers from a juxtaposition with the term "faith". It is, in fact, possible that according to popular belief the name meant "full of faith".

Diffusion of the name Federico

For centuries the name Federico was extremely widespread in Germanic-speaking countries, while it is scarcely present in Anglo-Saxon countries. In the country he enjoys mixed fortunes, however in recent years he has been particularly appreciated: according to the data ISTAT in 1999 4315 newborns were called with this name, while in 2022 - when Federico was placed in fifteenth place in the ranking of the most common names - they were 3021.

Personality of a child named Federico

Federico is equipped with aintuitive intelligence and a fort dynamism: he always needs action and sometimes he craves the desire and ambition of wanting to do everything. Great sports and an extremely active person, Federico always loves being very organized and hates the feeling of wasting time and energy.

It's a serious and conscientious manor, he strives to complete everything he has set and to achieve his goals, be they professional or family.

Sometimes it can appear authoritarian, also because he has a tendency to be particularly possessive, but in reality once the ice is broken Federico is charming, polite and gives great importance to loved ones and family.

It has a great adaptability and is committed to the conquest and achievement of its objectives with extreme tenacity and perseverance.

It's a man manly, active and enterprising, therefore, who after overcoming the first, initial mistrust, turns out to be a person sincere relationship and direct. She dislikes superficial relationships and has a deep sense of duty. E ' independent and prefers to test himself, always in search of security, both economic and sentimental.

What profession will Federico do? For him it is essential to find great motivation in what he does, so he will be particularly attracted to the commercial professions, in the field of sales and marketing, but also to professions that allow him to be always on the move, to travel and move.

The astrological sign corresponding to Frederick is theRam, which stands out for its dynamic and enterprising nature, for its apparent authoritarian air and its strong sense of duty.

The color associated with Federico's personality is yellow, a color capable of illuminating the dark sides of his life and will guarantee his success in all fields.

Federico's precious stone is the Diamond, the most authentic symbol of invincibility and tenacity.

Federico's lucky number is 5, a profound symbol of its independent and dynamic nature.

We offer you Frederick, a passage by Patti Smith, included in the Patti Smith Group's 1979 album Wave, and dedicated to her future husband Fred Smith.

add a comment of Name for child: Federico. Origins, meaning and curiosities