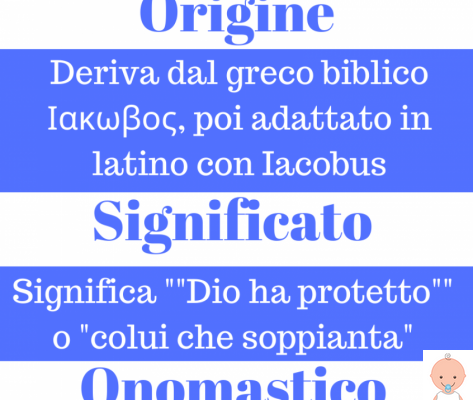 Today let's go through the list of male names to find James, a name of ancient origins, with an elegant and classic flavor. We discover in this guide the origin, the meaning, the curiosities of this name for child.

Generally the name day is celebrated in memory of St. James the Greater, July 25 or October 9 for the Orthodox), but it can also be celebrated on May 3 when it is remembered St. James the Less.

Origins and etymology of the name Giacomo

From the Biblical Greek term Ιακωβος (Iakobos), used in the New Testament to translate the Hebrew name יַעֲקֹב (Ya'aqov), the name was later adapted into Late Latin with James or, indeed, with Iacōmus.

In most modern languages ​​the Hebrew name Ya'aqov, carried by several Biblical characters, has evolved in only one way; instead in the village it has evolved in two different forms: Giacomo and Giacobbe. While Giacomo is quite widespread and popular, Jacob is certainly rarer.

Meaning of the name Giacomo

There are some doubts about the etymology: according to some sources it would be a theophoric name with the meaning of "God protected", according to other sources instead it would mean" the one who supplants "or"he who grabs by the heel ".

Diffusion of the name Giacomo

It is a very common name since ancient times: Jacob was the patriarch in the Old Testament, while in the New Testament James becomes more important and is the name carried by two of Jesus' apostles: St. James the Greater and James the Less. In the country it enjoys great popularity: in 2022 it ranked 35th in the ranking of the 50 most popular names in our country, however in recent years it has had a sharp decline. According to ISTAT data relating to the most common names in the country, in fact, in 1999, as many as 2469 children were called Giacomo, while in 2022 there were 1510.

Personality of a child named Giacomo

Determined, dynamic and reserved, Giacomo loves to work, engage and grow intellectually. He is highly regarded at work thanks to his commitment and stands out for his deep sense of justice. He is honest, he always says what he thinks, and he loves being a leader and having control over everything.

There your big perseverance it helps him to always get up after a failure, to start over and achieve his goals. He is a man charming and elegant, he is thirsty for knowledge and is an excellent interlocutor even on deep and complex issues. Sometimes he suffers from mood swings although he generally enjoys good self-control. AND' generous, autonomous and loves freedom; his wisdom drives others to turn to him often for advice and confidences.

What profession will Giacomo make? He will probably be attracted to all those professions that gravitate in the world of communication, art and journalism, but he also fulfills managerial and executive roles with satisfaction.

Giacomo's personality is close to that of those born under the sign of Gemelli: Giacomo loves change, is a great observer, does not tolerate hypocrisy and loves to discover ever new hobbies and passions.

Il red it is the color that best reflects Giacomo's character: passionate, courageous and industrious.

L'Amber it is Giacomo's precious stone: it represents his generous and protective side and his great persuasiveness.

Il 4 it is Giacomo's lucky number and evokes concreteness and constructiveness.

We have choosen You're Beautiful, famous song by singer James Blunt

add a comment of Name for child: Giacomo. Origins, meaning and curiosities