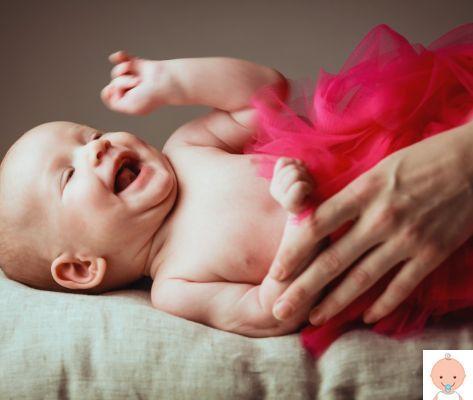 Want to give your child a particular name, ancient but also rare. A name that has an important meaning, that remains impressed, that is not taken for granted. The choice of name is not always that simple matter. There are parents who spend the months of pregnancy with the name book in your hands, to read, search, reflect, choose the most beautiful name for the baby on the way.


The dictionary of male names, villages and foreigners is very rich, but today we want to take you to the discovery of an ancient name, little heard, with Jewish origins: the name Ishmael.

An ancient name, which in the Bibblia is linked to the story of Abraham and Sarah, whose meaning is important, beautiful, especially for those who have faith. Let's get to know better the meaning, name day and all the curiosities about this rare name.

The name day of the name Ismaele can be celebrated on two different dates: on 17 June on the occasion of Saint Ishmael, bishop of Chalcedon and martyr under Flavius ​​Claudius Giuliano, or on 8 September on the occasion of the memory of blessed Ismaele Escrihuela Esteve, father of family and martyr in Paterna.

There are no variants and the country of the name Ismaele. In the country this is a very rare name.

There are several foreign variants of this name.

Origins and etymology of the name Ismaele

Ishmael is a name of Hebrew origin.


Ishmael is a biblical name, present in the Old Testament. That was the name of the son had by Abraham with the slave Hagar and born before Isaac, son of the promise, given by God to him and Sarah who could not get pregnant.

The Bible narrates that Sarah, Abraham's wife, could not have children, for this reason, Abraham had joined his slave Hagar and thus Ishmael was born. After the birth of Isaac, who was the son given by God to Abraham and Sarah despite the woman's sterility, Abraham was forced to remove Hagar and Ishmael. They got lost in the wilderness, but were saved by an angel who showed them a spring of water.

Ishmael a name also present in the Koran, prophet and apostle of God. He is also one of the protagonists of Giuseppe Verdi's Nabucco. Ishmael is also the name of the narrator of Moby Dick, a novel by Herman Melville.

Meaning of the name

Ishmael comes from the words "yishma" and "El". It means "God hears" or "God will hear".

Dissemination of the name

Ishmael is certainly a very rare name, especially in the country. Unlike other biblical names ending in "-ele", such as Raffaele, Samuele, Gabriele, Daniele, this is not a very chosen name among the parents and the villagers. In 2022, 112 children were called this way in the country, but in recent years the percentage of newborns given the name Ismaele has doubled according to ISTAT data.

Personality of a child named Ishmael

Children named Ishmael are usually very confident, determined children who know what they want from an early age. If they set themselves a goal, they want to achieve it, but at the same time they are also far-sighted, lucid, capable of choosing the best path. In front of a difficulty Ismaele does not hold back, he is a responsible, intelligent, serious type. A determined child, always a little more mature than his age. A teenager who knows what he wants and who can often conflict with his parents. A responsible, mature adult with all the credentials to be successful in life. That friend, that colleague, that brother, that son that everyone would like to have.

Due to the characteristics mentioned above, the zodiac sign that best suits the name Ishmael is Scorpio. Ruled by Mars and Pluto, this sign is one of the strongest, most tenacious, determined. Those born under the sign of Scorpio are characterized by a very strong personality, they are a bit unconventional, stubborn, intelligent, smart. Scorpio children are also intuitive and curious. They will fill you with "why?" and they won't stop until they get the explanation that satisfies them. The little ones of the Scoprione are insightful from the earliest years, they do well even at school. If they set a goal, they almost always manage to achieve it with excellent results.

The color that binds to the name Ismaele is orange.

The birthstone for someone called Ishmael is quartz.

The animal related to the name Ishmael is the antelope.

Thinking about the biblical story of the name Ishmael, the son of Abraham, we thought of dedicating "A Promised Land" by Eros Ramazzotti to the one who bears this name:

add a comment of Name for child: Ishmael. Origins, meaning and curiosities