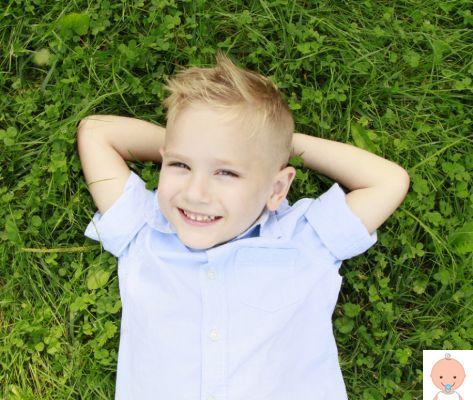 Jacopo is a masculine name that is particularly appreciated by the parents and the villagers. It is an archaic variant of the names James or Jacob, with which, of course, it shares its origin, etymology and meaning. Let's find out in this guide the meaning and origin of name Jacopo to un child.

The name day can be celebrated on the same day as Jacob (December 24 in memory of St. Jacob, biblical patriarch) or of James (July 25) but there are also dates in which three blessed who called themselves Jacopo are remembered:

Origins and etymology of the name Jacopo

As we said, the name Jacopo is an archaic form of the name Giacomo or Giacobbe which is an adaptation of the Latin term Iacobus. More specifically, it is a different adaptation of the biblical Greek Iakobos from Iacobus, which is used in the New Testament to translate the Hebrew name Ya'aqov. Jacob is a name of biblical tradition, carried in the Old Testament by the son of Isaac and Rebecca and father of the founders of the twelve tribes of Israel (he was also called Israel).

Meaning of the name Jacopo

The Hebrew name Ya'aqov has an uncertain meaning: according to some sources it could be a theophoric name with the meaning of "God has protected", according to others, however, probably "he who takes by the heel", or "he who supplants" , because, according to the biblical narrative, Jacob was born holding his twin brother Esau on the heel, and as an adult he stole his birthright.

It should be noted that the Hebrew name Ya'aqov in most languages ​​has evolved into the name Giacomo alone, while in el paeseno it has taken two distinct variants: Jacob and later Giacomo.

Diffusion of the name Jacopo

Jacob was the most common name among the Jews in the first century AD but with the passing of the centuries to acquire greater fortune was the variant James which today is a fairly common name in the country, although in recent years there has been a growing spread of the variant Jacopo (or Iacopo). According to ISTAT data, in 1999 1220 babies were called Jacopo, while in 2022 1702 babies were called this way. Jacob is practically almost non-existent, while Giacomo enjoys greater luck: in 2022 this name was chosen by 1550 new parents.

Personality of a child named Jacopo

Jacopo is a man of character that does not stop in the face of difficulties when it has to achieve its goals. It is determined, dynamic and at the same time reserved. It only opens with an intimate circle of people, friends and family.

Jacopo is great worker, is strict and loves to be independent, hardly asks for someone's help. He knows what he wants and has the means to get it. He wants to be the leader and be in control of everything. He is an intellectual who loves to share his worldview with others, his perseverance and his optimism help him to get up after a fall or failure.

Jacopo stands out from the others for his rectitude, is honest and openly says what he thinks without fear of the judgment of others. He is charming and in love he is affectionate and romantic, he always finds the right words, even if at times he tends to be too jealous.

Jacopo is often a man impatient, does not like to wait and waste time in meaningless discussions, however his thirst for knowledge and his desire to communicate and transmit his thoughts to others help him interact with others.

Jacopo is particularly wise, loves to give good advice and has an excellent spirit of observation, enjoys great ability to self-control but can also manifest sudden mood swings if pushed to the limit.

What profession will Jacopo make? He will likely find great satisfaction in journalism, politics, or teaching.

Jacopo's personality is similar to that of the Gemelli who know how to use words to get people to join a cause and have no problem adapting to different situations. Like all Gemini, Jacopo is curious, he loves to know and is a brave man.

Il red it is the color that best reflects Jacopo's character: passionate, courageous and hardworking. This color also symbolizes his energy, his ability to reassure and help others and his desire for success.

L'Amber is Jacopo's lucky stone, with its energy and ability to protect the wearer.

Jacopo's lucky number is 4 which symbolizes concreteness and the ability to make solid ideas, beliefs and projects.

add a comment of Name for child: Jacopo. Origins, meaning and curiosities