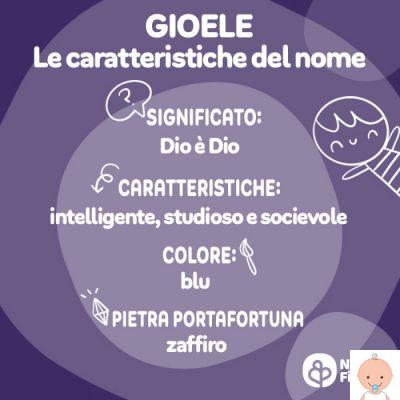 Joel it's a name for child of biblical origin that is carried by numerous characters of the Old Testament. Let's find out together the meaning and origin of this male name and also the personality, the zodiac sign, the lucky charms of those who bear this name.

According to the Christian calendar, the name day is celebrated on 19 October, the day the prophet Joel is remembered.

A female variant is not known.

Origins and etymology of the name Gioele

The origin of the name dates back toJewish יוֹאֵל (Yo'el), transformed into Greek with Ιωηλ (Ioel) and in Latin with Iohel. It is composed of the terms Yeho and El ("God").

Meaning of the name Joel

The meaning can be traced back to "God is God", since both the terms Yeho and El mean God.

Diffusion of the name Gioele

The name is very common in Christian communities because this is the name of many characters of the Old Testament and above all one of the twelve prophets mentioned in the Bible. And the prophet Joel was very followed and considered by the Christians who lived in that period.

In the country, according to ISTAT data, the diffusion of the name Gioele it has significantly increased in recent years: in 1999 only 297 children were called this way, while in 2022, as many as 1590 new parents chose the name Joel.

Personality of a child named Joel

Joel is a person who does not like the change, which he considers a step back in his life and therefore a brake on his personal growth. It is therefore a tendential soul conservative, who appreciates the beauty of already consolidated habits and achievements.

It's a person strict and he is unable to work or collaborate with people who do not take things as seriously as he does: he prefers to act rather than delegate or ask for help.
He needs to feel safe, to know that his loved ones believe in him. AND' curious, outgoing, loves to impress others and loves to entertain people with erudite and engaging speeches.

It's a perfectionist, before doing something carefully evaluates the pros and cons and does not interrupt an activity if he has not managed to finish it with extreme precision and punctuality.

E' severe with himself and with others, he is a tireless worker and thanks to his tenacity and perseverance he is able to remove all the obstacles that arise and that prevent him from completing a task or a challenge that he has set for himself.

He loves to spend his time in family, with his affections, he has a great sense of friendship and is faithful and attentive, but carefully selects his friendships.

He dislikes disputes and quarrels and often takes the role of mediator to restore peace in a climate of conflict.

What profession Joel will make? He will probably find his greatest gratification in all the professions that allow him to put his meticulousness and curiosity about him to good use; teacher, historian, humanist, scholar, tour guide, archivist.

The sign of the Cancer it is the one that best reflects the characteristics of Joel's personality: those born under this sign are known to be hard workers. They are ambitious people who usually set goals that are difficult to reach but who succeed in their intent thanks to tenacity and perseverance.

Il blu it is the color of Joel: often associated with wisdom, serenity and dreams, it also symbolizes calm and sincerity.

The birthstone of Joel is the cornelian, known for bringing courage to the person who possesses it.

Il six it is the lucky number of Joel, who is constantly looking for family stability, harmony and completeness.

We dedicate an interpretation by the showman Gioele Dix of the famous "There is a time for everything", a poem in music for all children.

add a comment of Name for child: Joel. Origins, meaning and curiosities