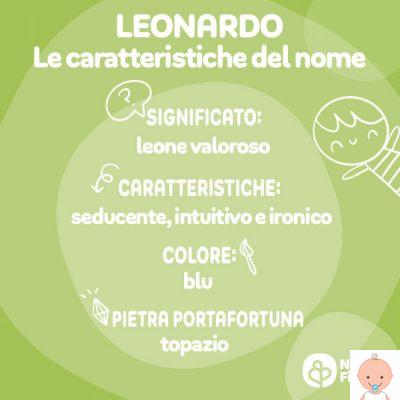 Leonardo it's a name for child which in recent years has been increasingly appreciated by el paeseni parents, a name of ancient origins and reminiscent of great characters in our history. Let's find out together the origin, meaning and curiosity about the male name Leonardo.

The name day is celebrated in most cases on November 6, in memory of Saint Leonard of Noblac or of Limoges, abbot and hermit.

Origins and etymology of the name Leonardo

Leonardo derives from the term of origin Lombard Leonhard, which was composed of the Germanic elements levon, which meant "lion", and hard or hardu, which meant "strong", "brave", "brave".

Meaning of the name Leonardo

There is no doubt, looking at the root and the origin of the name Leonardo, that the meaning is that of "brave lion, courageous lion".

Podcast: the meaning and curiosities about the name Leonardo

Diffusion of the name Leonardo

Leonardo has been for many years one of the most loved names by parents and the villagers and last year it was the fifth name most popular in the country. Its popularity has been increasing over the last twenty years: according to ISTAT, 1999 children were called Leonardo in 2899, while in 2022 there were 6144.

Personality of a child named Leonardo

Leonardo is a person intuitive, seductive, of great charm: she has a sense of humor, capable of dialectic and adaptation and always tries to find a compromise, to achieve balance and harmony.

Proud, nervous, often unsatisfied with himself Leonardo can be very sensitive: the curiosity it is his gift, but also a double-edged sword because if it gives his personality a brilliant and eclectic trait, on the other hand it makes him unstable.

Often the men who are called Leonardo are technirefined, they have a great artistic sense, but they also need the support and presence of the family.

As children they can be little angels, but also a little machiavellici, with a sweetness mixed with malice: they must be followed carefully because they can become perfectionist and responsible adults or, on the contrary, characterized by a certain laxness.

Leonardo is not indifferent to pleasure, beauty and refined things. Often, however, they have difficulty choosing and are rarely fully satisfied.

What profession will Leonardo do? He will be attracted to professions related to art, creation, aesthetics. He may love caring for others, like a doctor, or he will love oral or written expression.

The zodiac sign that is most associated with Leonardo's characteristics is him Scorpio. A perfectionist and very attentive to his image of him, he is a careful and meticulous worker with a strong character.

The color that best corresponds to Leonardo's name is blu symbolizing calm, serenity and peace.

Leonardo's birthstone is the topaz, known for spreading joy and happiness. This gem helps to maintain momentum and enthusiasm in life's challenges and stimulates positive emotions and intellect.

Leonardo's lucky number is 6, which symbolizes beauty, love and harmony. This number strengthens Leonardo's qualities by mitigating the negative aspects: in this way Leonardo can find balance and harmony.

If I were Leonardo

how many things I would invent!

I would love to invent

arms with wings to fly

on the traffic that touches the city.

"If I were Leonardo"is a nice song presented at the Zecchino D'Oro in 1969.

add a comment of Name for child: Leonardo. Origins, meaning and curiosities