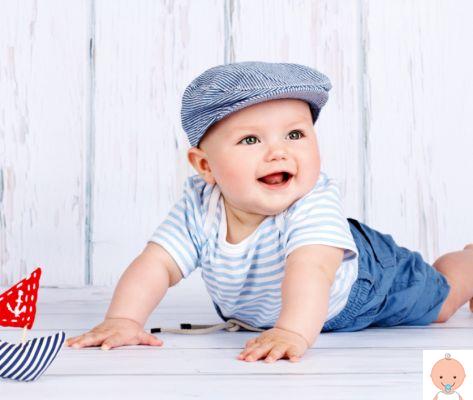 Luca is a male name of ancient biblical origins. He was thus called one of the most famous Apostles, also the author of the Gospel according to Luke. Let's see in this guide the origin, personality and curiosities of name Luca for child.

The name day is celebrated on October 18 in memory of St. Luke, author of the Gospel of Luke and the Acts of the Apostles, patron saint of doctors and artists.

Origins and etymology of the name Luca

Luca derives from the Latin name Lucas, short for Lucanus, or from the Greek name Λουκάς (Loukas), also an abbreviation of Λουκανος (Loukanos). Both names mean "coming from Lucania". From Lucanus and Loukanos derives the name of the Lucanian village of which Luca is considered a hypocoristic.

Meaning of the name Luca

If, as mentioned, Luca probably means "Lucan", it must also be said that other sources refer the origin of the name to the Latin term Lux, which means "light".

Spread of the name Luca

The first time the name Luca is found in theAeneid where Luke is one of the leaders of the army of Turnus, but his great popularity was born with Christianity and the spread of the Gospels. Luca was one of the 12 Apostles, author of the Gospel according to Luke and of the Acts of the Apostles and in the whole Western world he had great diffusion.

In el country, according to the data ISTAT, the popularity of the name Luca has slightly decreased in recent years: in 1999 7779 babies were called this, while in 2022 only 2503 new parents chose this name for their baby.

Personality of a child named Luca

Luke's character certainly is determined and stubborn: he does not spare himself in the realization of his projects, he uses his intelligence in a creative and constructive way, but takes the right time to evaluate and situations before acting.
Luca has a great sense of responsibility and he never takes things lightly, he stands out for his maturity, but also for his sympathy and sense of humor that makes him lovable and welcome. Luca has a great will and he puts great effort into what he does: he is selfless, loves to be useful for his acres and for the community and always acts sincerely because he hates hypocrisy.

His temperament is continuous evolution and changes adapting to the environment and circumstances. Luca is a person accommodating and can easily fit into social and professional contexts. He is talkative and funny and always manages to animate situations. AND' laborious and courageous and does not allow himself to be discouraged by difficulties and failures. Sometimes he can be reserved and placid, only to become outgoing and sociable.

What profession will Luca make? He will be attracted to medical careers, professions in the arts, but also in marketing and commerce.

L'orange it is the color that reflects Luca's personality, with his optimism, creativity and communication.

Luke's amulet is lo Emerald, which connotes wisdom and hope, but also perseverance in the realization of projects.

Luca's lucky number is 5 typical of a sociable, active and outgoing person.

add a comment of Name for child: Luca. Origins, meaning and curiosities