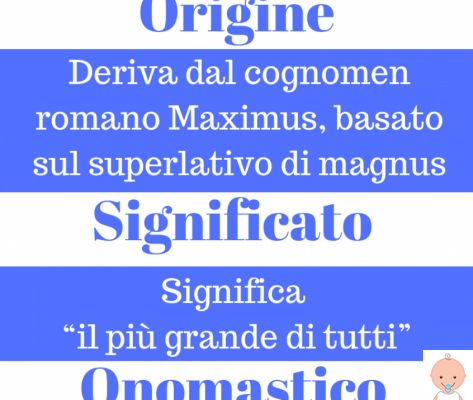 We leaf through the list of classic male names and of very ancient origins and we find Massimo, who refers us to the Ancient city and its leaders. We discover in this guide the origin, the meaning, the curiosities of this name for child.

In many cases the name day is celebrated on 25nd June in honour of San Massimo, bishop of the city. But there are also other possible dates on which various St. Maximus are celebrated.

Origins and etymology of the name Massimo

The name Massimo derives from the Roman surname Maximus, in turn based on the term maximus, superlative of magnus ("great"). In Ancient times the city could also be given to tall people.

Meaning of the name Massimo

The meaning is closely related to the superlative of magnus, so maximus (Maximus) means "the biggest one”With a marked auspicious or celebratory meaning.

Diffusion of the name Massimo

Many historical figures of the ancient city and also several Christian saints were called Maximus and this certainly contributed to increasing the popularity of the name both in the Middle Ages and in the Renaissance. Today it is a less common name, even if the trend remains almost unchanged in recent decades: according to ISTAT data relating to the most popular names in 1999, 483 children were called, while in 2022 there were 482.

Personality of a child named Massimo

Massimo is a man of strong personality: his active and dynamic nature always allows him to stand out in the midst of the group and to manifest his charisma. He is passionate, calm and knows how to impose his beliefs without having to force circumstances.

Massimo is a perfectionist and is capable of carrying out any task, even the most complex one. His exuberance often serves above all to mask hers sensibility and his constant search for safety in others as well. It is extremely intuitive and always manages to understand the point of view of others to be able to help them in the right way.

It has a strong ability to logic and a great intelligence, but often shows a double nature: he can be meticulous and very precise, and a moment later undisciplined. Despite his changing nature, Massimo is sociable, generous and selfless with friends and loved ones.

What profession will Massimo make? Massimo loves to stay with his family so he will be able to choose to continue an entrepreneurial activity that has already started, but he will also be attracted by professions of an artistic or aesthetic nature, those related to food, catering, hospitality, gastronomy.

Maximus is closely linked to the sign of Virgo. He values ​​order and perfection and always tries to do better than others. However, this attitude only serves to hide the fact that he is a sensitive person who is afraid to reveal his true nature to others so as not to be hurt.

The color that best symbolizes Massimo is the violet, which represents dreamers and promotes intelligence and sweetness.

Massimo's precious stone is theamethyst, which helps him to concentrate better and stimulates his intuitiveness. It also alleviates his anxieties and insecurities.

Massimo's lucky number is 5, symbol of adventure and dynamism.

We have selected a version of the extraordinary "You are a big thing"sung by Massimo Ranieri.

You are a big thing for me.

Something that makes me fall in love.

Something that if you look at me, it dies like that, looking at you.

add a comment of Name for child: Massimo. Origins, meaning and curiosities