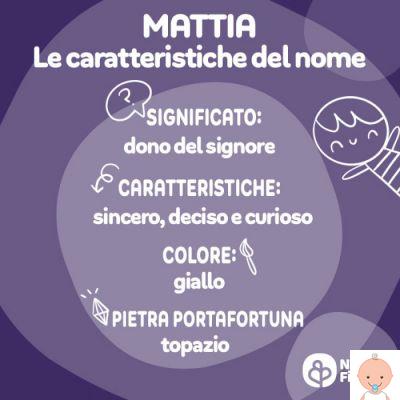 Mattia it's a name for child which has enjoyed growing fortune in recent decades in our country. The meaning of the term is the same as that of Matthew, but the two male names should not be confused: even in the Bible Matthias and Matthew were two different apostles. We discover in this guide the origin, personality and curiosities of the name Mattia.

The name day is celebrated on May 14 in memory of St. Matthias the apostle, patron saint of engineers and blacksmiths, who is also invoked against smallpox.

In the village there are no male or female variants.

Origins and etymology of the name Mattia

The name derives from the biblical Greek Ματθιας (Matthias), a variant of Ματθαιος (Matthaios), which in turn comes from the Hebrew Mattityahu, Mattithyahu.

Meaning of the name Mattia

The name is composed of the two terms mattath ("gift") and Yah (short for YHWH, the Hebrew name for God) and therefore the meaning is, as for Matthew, "gift of God"

Diffusion of the name Mattia

Matthias appears in the New Testament with the figure of the apostle Matthias, who replaced Judas Iscariot. In the country, according to ISTAT data, the name Mattia has always been highly appreciated and in the last twenty years it has experienced a moment of great popularity: in 1999, 4497 children were called Mattia, but in 2022 the number rose to 6402.

Personality of a child named Mattia

Mattia is a lovable man, generous, kind and selfless. It is a real resource for those who know him and for the whole community. He strives to be useful for others, has a great sense of solidarity and responsibility and puts passion and commitment into everything he does. He is gifted with common sense and kindness, which make him an excellent interlocutor and adviser. He has a deep inner universe that pushes him to be extremely communicative and immediately afterwards dreamy and reflective and maintains a personal balance by alternating social life and solitude. He is definitely stubborn and determined, especially if he has to defend his beliefs and his values. He has a rooted desire to please and to be accepted, a very developed sense of friendship and does not hesitate to make great sacrifices for those he loves.

It makes great sense practical and he is rigorous in carrying out his duties: he is efficient and productive at work and puts great passion into what he does. He is confident and a perfectionist and rarely doubts his abilities, he has a strong capacity for initiative and generally makes right and wise choices, even in difficult situations. L'impatience and susceptibility are his Achilles heels and push him to undertake always new challenges that aim at excellence.

What profession will Mattia have? He can excel in every field, from medical to real estate and commercial, in the artistic professions even as a freelancer.

The zodiac sign that best defines Mattia is that of Lion. Those born under this sign are considered good leaders. Fidelity and loyalty are among the main qualities of Leo.

The color that best reflects Mattia's character is the yellow, which refers to an idea of ​​generosity and joy. Yellow represents self-esteem, light and power.

Mattia's lucky number is 7, the number symbol of the capacity for analysis and wisdom, but also of loneliness. It is a number that refers to the idea of ​​inner completeness.

There are not many songs dedicated to Mattia: we propose "Tilt (is there Mattia?) "by John De Leo

add a comment of Name for child: Mattia. Origins, meaning and curiosities