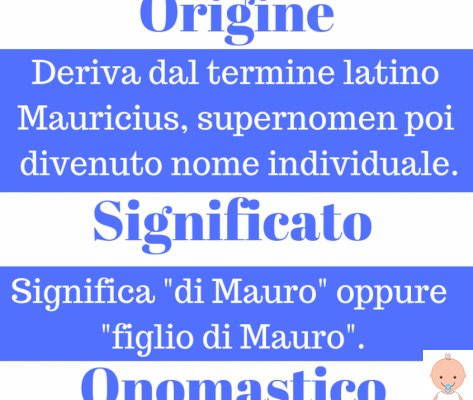 Maurizio is one of the male names of classical origin which, at the same time, is not particularly widespread, despite enjoying a certain appreciation in the country. We discover in this guide the origin, the meaning, the curiosities of this name for child.

Maurizio celebrates the name day on September 22th when the Church remembers St. Maurice, captain of the Theban Legion who suffered martyrdom with all his fellow soldiers on the orders of Maximian Hercule.

Origins and etymology of the name Maurizio

The name Maurizio has Latin origins and derives from the term Mauricius or Mauritius. It was a supernomen (therefore a second surname) of the imperial age, which later became an individual name.

Meaning of the name Maurizio

It is a patronymic of the name Mauro, so it means "by Mauro"or"son of Mauro".

Diffusion of the name Maurizio

In the Anglo-Saxon countries the name spread mainly with the Norman conquest and we also find it in the version Morris. In el country it is not among the most used names: according to the data ISTAT in 1999 274 children were called Maurizio and the number dropped further until 2022, when only 158 children called Maurizio were registered in the registry office.

Personality of a child named Maurizio

Maurizio is a very man thoughtful and active, who never takes his commitments lightly and can always be counted on. He is meticulous, precise and loves to do anything well. He has a lot common sense and loves to surround himself with new friends because he is friendly and hospitable, even if he does not hide his reserved, emotional and often hypersensitive nature.

He is constantly motivated by the need to please and be admired and he is in search of peace and tranquility, circumstances that allow him to reflect, meditate and refine his extraordinary introspective ability. He has one critical mind, often tending to skepticism, but also analytical and rational and loves to question reality by looking for new aspects to discover.

As a child Maurizio appears as a wise child, sometimes too much, with a tendency to be inhibited and to seek the solitude, shows little of his feelings and emotions and for this reason it is important to help him, as a child, to socialize with his peers.

At the same time, Maurizio is kind, sensitive and often tries to help others, because he has high ideals and does not compromise.

What profession will Maurizio do? He is an unusual man so he will be attracted to unconventional professions, perhaps connected to new ones technologies, but may also be interested in human Sciences, or to the professions that bring him into contact with the public.

Maurizio is linked to the sign ofAquarium, a dreamer temperament, but at the same time reliable and able to realize what he has in mind.

Il blu it is the color of Maurizio: a symbol of calm, serenity, it manages to bring balance and harmony to the emotional sphere.

The Mauritian birthstone is the amulet of sailors. Let's talk aboutaquamarine, defined as the stone of courage and capable of increasing intellectual strength and energy.

Il 3 is the lucky number of Maurizio, a symbol of creativity and development of the intellect.

Here is an excerpt from Maurice white intitolato "I Need You".

add a comment of Name for child: Maurizio. Origins, meaning and curiosities