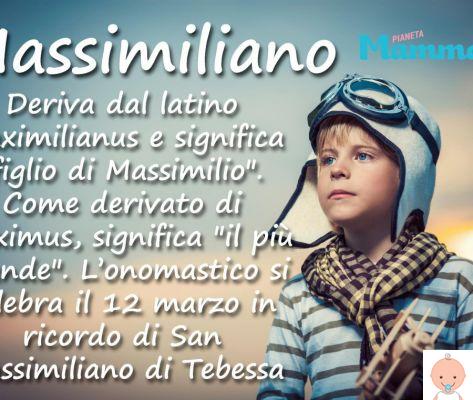 Of ancient Roman origins, Massimiliano is a male name that is no longer so common in the country but which remains a perfect choice for parents who prefer to give their child a classic and at the same time uncommon name. We discover in this guide the origin, personality and curiosities of Maximilian name for child.

Origins and etymology of the name Massimiliano

The name Massimiliano can have two different origins:

Some sources, however, explain the origin of the name with the combination between the two names Massimo and Emiliano.

Meaning of the name Maximilian

Given the different hypotheses on the origin of the name we can say that Maximilian can mean:

Diffusion of the name Maximilian

The compound name, born from the union of Maximus and Emilian, appears for the first time when Frederick III of Habsburg, Sacred the City Emperor, chose it for his son Massimiliano.

Massimo is a name that always enjoys constant popularity in the country, while Massimiliano is certainly less widespread (and even less is his feminine variant).

According to ISTAT data, in 1999 they were called Massimiliano 524 childrenWhile in 2022 it was only that who chose this name 178 neogenitori el paeseni.

Personality of a child named Maximilian

Maximilian has a character Reserved e discrete, although he does not hesitate to appear friendly and outgoing in public. The challenges and difficulties stimulate him and he never misses an opportunity to demonstrate his abilities and test himself. His willpower is iron and helps him face life's challenges and overcome all obstacles he faces. He has great confidence in his abilities, he is stubborn and stubborn and hardly changes his mind. His curiosity encourages him to improve himself, while his sometimes excessive ambition stimulates him to give himself very high goals.

E' gallant ed charming, is jealous, faithful and detests betrayals. On the surface Maximilian may seem inaccessible and severe, but deep down he is actually tender and affectionate. He is always looking for the stability, both financial and emotional, but it does not change his mind, especially if the change can lead to improvement or allows him to reach a higher goal.

Maximilian's character is associated with the characteristics of those born under the sign of Scorpio: generous and helpful, they do not hesitate to become even bad if they are betrayed. To protect himself from suffering, he prefers to keep a certain safe distance from people.

Maximilian is associated withorange which evokes his creativity, his optimism and his constant search for both emotional and financial security.

Maximilian's amulet is the Topaz, a stone that highlights its elegance and originality.

Maximilian's number is 6, the "perfect number in itself", a symbol of a goal, of a goal to be achieved, but also of harmony and completeness.

add a comment of Name for child: Maximilian. Origins, meaning and curiosities