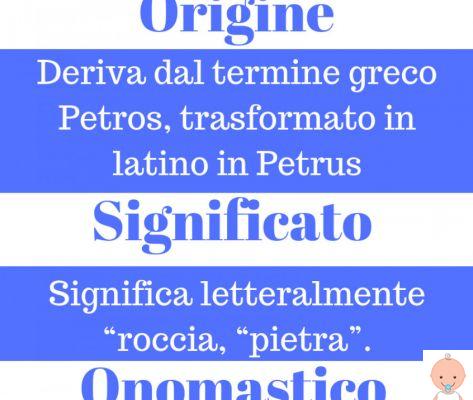 Pietro is a male name that has been on the list of the 50 most used names in the country for years and continues to be highly appreciated by new parents. We discover in this guide the origin, the meaning, the curiosities of this name for child.

In most cases the name day is celebrated on 29nd June when the Church remembers Saint Peter, apostle of Jesus and first Pope, martyr to the city under Nero. However, there are numerous saints called Peter.

Origins and etymology of the name Pietro

The name Pietro derives from the Greek term Petros, which has been transformed, in Latin, into Petrus. In turn, the name Peter is used in most versions of the New Testament as a translation of the Aramaic name Cefa, which was the name given to Jesus by the Apostle Simon.

Meaning of the name Peter

Spread of the name Pietro

The spread of the name in the Christian era is mainly due to the figure of Peter, considered the First Pope. In the country the name Pietro was the twenty-first most widespread name in 2022 and its popularity shows no sign of decreasing, but rather remains stable over the years. In fact, in 1996 they were called Pietro 2075 children, while in 2022 this number has risen to 2529.

Personality of a child named Peter

Pietro is a man very kind and generous and loves to take care of the weakest and those in difficulty. He is sociable and easily builds new relationships and new bonds. Peter has one humble nature however, he often finds himself at the head of a group without wanting to, this is because he has an innate nature leadership skills which is also expressed in his involvement in all the situations that are close to his heart and in his ability to overcome the problems he faces.

Certainly Pietro is an extremely person ambitious: sets a goal and gives up the hold until the goal is achieved. For him there are no problems, in short, but only challenges, to be faced with courage and overcome.

Pietro is a lot honest and sincere and is willing to sacrifice a lot to preserve his moral values ​​and to help others. He is a hard worker and only stops when he has achieved success, however, sometimes he risks trusting others too easily and falling victim to cheaters and fake people.

Love to be involved in the life of his loved ones and is always very present with family and friends. He is loyal, generous and always takes great pleasure in being in company.

What profession will Peter make? She may love professions related to positions of power and money management, but also positions in the technical field.

Peter's character traits are very similar to those born under the sign of Lion: natural, courageous and generous leaders.

Pietro's color is yellow, which symbolizes the joy of living, dynamism and kindness and which also refers to his generosity and the ability to be close to those he loves.

Peter's birthstone is the diamond, a gem that refers to the idea of ​​purity, immutability and power.

Peter's lucky number is l'8, a symbol of leadership skills and power, but also of the extraordinary ability to achieve set goals.

We propose the song entitled Pietro dei Nomads, Of 1993.

add a comment of Name for child: Pietro. Origins, meaning and curiosities