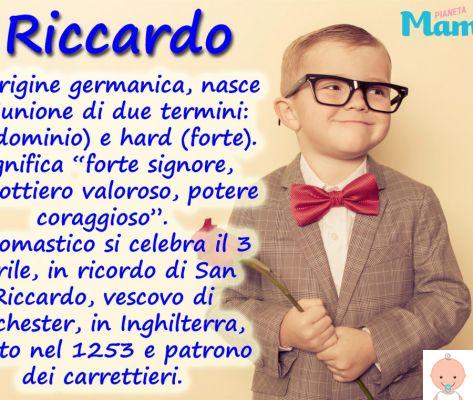 Riccardo is a masculine name of the village of Germanic origins, certainly traditional and carried by numerous kings, which is meeting with increasing interest on the part of the new parents and the villagers. We discover in this guide the origin, personality and curiosities of Riccardo name for child.

Riccardo's name day is traditionally celebrated on 3th April when St. Richard is remembered, bishop of Chichester, England, who died in 1253 and patron saint of carters.

Origins and etymology of the name Riccardo

The origin of the name Riccardo is Germanic and comes from the union of two terms: ric (domain) and hard (strong).

Meaning of the name Riccardo

The meaning of the name Riccardo could be of different interpretation: "strong lord," brave leader ", brave power".

Spread of the name Riccardo

Widespread in England after the arrival of the Normans, the name became one of the most widespread and enjoys great popularity both in the Anglo-Saxon and European world. In the country Riccardo was very common in 2009 and, although in slight decline, continues to be one of the most chosen names by parents. According to the data ISTAT in 1999 4634 newborns were named and in 2022 4.087. Riccardo is currently the tenth most chosen name in our country.

Personality of a child named Riccardo

Riccardo is known and loved for his kindness and courtesy. He has a balanced and calm temperament and does not panic, even when faced with delicate problems. He has a nature friendly, very easily weaves bonds of friendship, even with reserved people. She loves spending time with her friends and helping them with problems.

However it never goes underrated: behind his friendly and simple appearance he is very intelligent and calculating.

It's a person fortunata who often manages to get what he wants. He loves family, he is not always faithful but when he chooses a partner for life he will be a reliable companion.

What profession will Riccardo make? From a professional point of view, Riccardo is very methodical and a perfectionist. He only stops when he has done his job brilliantly, always has new ideas to improve his work and is a perfectionist. Many types of professions will appeal to him, he will likely be oriented towards independent and freelance careersi, or professions in the field of aesthetics, cooking, oenology, or technical and specialized occupations.

The astrological sign that is closest to Riccardo's character is that of the gods Gemelli: characterized by a natural elegance and an extremely versatile personality.

The color red it is the one associated with Riccardo: a color that refers to sensuality, courage, ardor, but also nobility of soul and dynamism.

Riccardo's lucky number is 7, connected to a strong spirituality and ability to transfer magic in everyday life.

add a comment of Name for child: Riccardo. Origins, meaning and curiosities