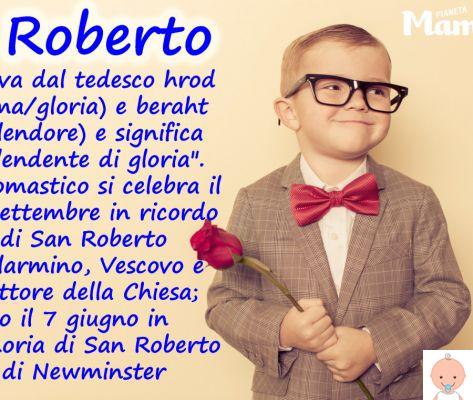 Roberto it's a masculine name strong, vigorous and of noble origins. If you are expecting a boy and you are still choosing the name, here are the origins, the meaning, the curiosities about this name and the personality of Roberto.

The name day of Roberto is usually celebrated on September 17th in honor of San Roberto Bellarmino, a Jesuit and cardinal who died in 1621, patron saint of catechists and teachers. But many prefer to celebrate June 7, the day when St Robert of Newminster is celebrated, and they also celebrate people who are called Roberta.

Origins and etymology of the name Roberto

The name Roberto derives from the term Germanic Robert. In particular, the ancient Germanic name was Hrodebert, composed of hrod ("fame", "glory") and beraht (or berht, "brilliant", "illustrious").

Meaning of the name Roberto

Video: origins and meaning of the name Roberto

Spread of the name Roberto

The name is quite widespread in history and so many kings, writers, people who later became famous were called. It is found in several variations, especially in the Anglo-Saxon world, such as Rob, Bob, Robin, Robertino.

A few years ago Roberto was certainly a more widespread name than today. According to the data ISTAT in 1999 they were called 1582 children, while in 2022 only 575 babies were called by this name.

Personality of a child named Roberto

Sociable and pleasant, Roberto he may appear reserved on first impressions, this is because he is above all sensitive and emotional and wants to keep control of the situation. He has a strong mind, capable of immediate understanding and an extraordinary one adaptability. He can be convincing if necessary but oscillates between two opposite tendencies: on the one hand he is enthusiastic, communicative, at times he risks wasting his energies, on the other he strives to build but can fall into states of pessimism.

Roberto is full of courage, energy and business acumen. AND' concrete and pragmatic, has a logical and rational mind and prefers to rely on practical and logical tests rather than intuition. When he feels humiliated he can be capable of even violent tantrums, for this reason his behavior can sometimes appear contradictory and prey to mood alternation. He is therefore an intelligent, solid and lively person who can sometimes fall into a state depressive.

For this very reason, children named Roberto need to develop their own creativeness, their skills, but also of borders: dance, theater, drawing are flexible arts that can satisfy Roberto.

Roberto likes order and power, he cares about his own economic conditions and in love he is jealous, passionate, ardent.

What profession will Roberto do? He will likely choose a profitable profession. He will therefore be attracted to a commercial job, a creative profession or a profession linked to the business world.

The zodiac sign that best represents Roberto is that of Virgin: the most pragmatic, practical and concrete sign of the Zodiac.

The color associated with Roberto is the red, symbol of vital, mental and physical energy. It fights negative energies and is a symbol of great personality and self-confidence.

The stone that brings good luck to Roberto and associated with this name is the Ruby, the red stone par excellence.

Roberto's lucky number is 6, which favors the realization of projects and ambitions, represents a point of arrival and completeness.

"Roberto"is the title of a song by Luca Barbarossa. The text is a reflection on the difficulties of growing up, of becoming a man, with its baggage of disappointments, but also of the love one feels for one's mother.

add a comment of Name for child: Roberto. Origins, meaning and curiosities