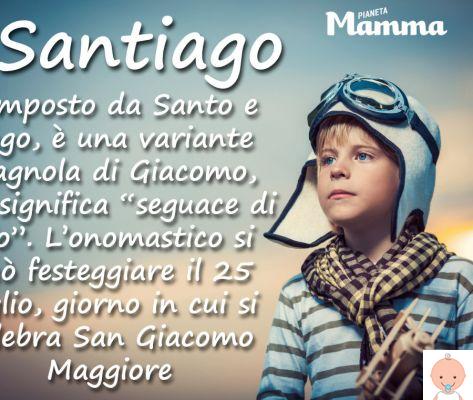 Portuguese or Spanish male name, Santiago is a name for a boy which in recent years is increasingly appreciated and chosen by parents and the villagers. Let's find out together the origin, meaning and curiosity about the name Santiago.

A female variant is not known.

Origins and etymology of the name Santiago

Derivative of the Hebrew "Jokob". Santiago is a name made up of two words: the Spanish word saint ("holy") associated with Yago, a form archaic Spanish of James which means "God protects".

The male name Santiago is the Spanish variant of "James”, But it could also derive from Diego, although it is more likely that they are two distinct names.

Meaning of the name Santiago

The name Santiago literally means "San Giacomo". The name Giacomo, of which Santiago may be the Spanish version, instead means "follower of God".

Spread of the name Santiago

The name Santiago has had a great diffusion in recent years thanks above all to the fact that the Argentine showgirl Belen Rodriguez in this way he called his son, had by Stefano De Martino. According to the data ISTAT in 1999 only five children were called Santiago in the whole country while in 2022 the number had risen to 371.

Personality of a child named Santiago

Santiago is an open man, friendly, sociable, very active and dynamic. He cares a lot about his appearance, he shows up often conciliatory and available because pleasure is important to him.

He is very curious, and this curiosity pushes Santiago to diversify his activities because he loves to be always on the move and appreciates the change.

Has a strong sense of freedom, does not like constraints and this aspect could make him risk slipping into a certain superficiality.

As a child Santiago is impulsive, unstable, impatient and susceptible. This is why it is important to stimulate in him the love for sport, creative jobs, the arts.

Santiago loves success, power, leadership, freedom. He is a man ambitious which aims to enrich one's material good and well-being. The money for him, it is important but he always shows himself generous towards friends and family.

His need for security and love makes him want to build a family to which he will always remain very attached.

What profession will Santiago do? Certainly nothing taken for granted. He will probably be attracted to the commercial sector, the travel sector, seasonal occupations and all those professions that allow him to stay on the move and travel.

The sign of the zodiac that best represents Santiago's character traits is that of Balance, ambitious, attracted to beautiful things and constantly looking for balance and harmony.

The color of Santiago is the yellow, a symbol of vitality and pure energy, but also of optimism and positivity.

The precious stone that can be an amulet for Santiago is the pirite, sparkling and golden, considered a real talisman since ancient Greece.

We bring you Desde Lejos by Santiago Cruz, for a passionate soundtrack in pure Spanish style.

add a comment of Name for child: Santiago. Origins, meaning and curiosities