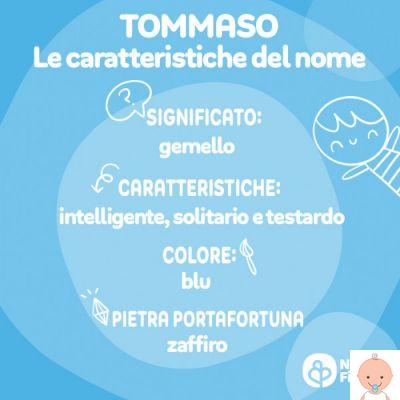 Tommaso is a male name of Aramaic origin and biblical tradition that never ceases to please the new parents and the villagers. In fact, he has remained firmly in the top ten of the most popular names in the country for many years. We discover in this guide the origin, the meaning, the curiosities of this name for child.

Many saints and blessed who bore the name Thomas. Generally, however, the name day is celebrated on one of the three dates in which the major saints are remembered:

Origins and etymology of the name Tommaso

The origin of the name Tommaso goes back to the Aramaic name Ta'oma or Te'oma, which was then rendered in Greek and Latin with Thomas.

It is a name of biblical origin: the apostle Thomas brought it in the New Testament.

Meaning of the name Tommaso

In Aramaic the term Ta'oma, from which Thomas in Latin and subsequently Thomas derives, means "twin".

Diffusion of the name Tommaso

The name began to spread more and more in the Christian sphere thanks to the numerous saints and blessed who called themselves Thomas, like Thomas of Celano or Saint Thomas Aquinas. In el country it is a particularly name popular especially in the central and southern regions and for years it has been at the top of the ranking of the most popular names. According to the data ISTAT, in 2022, Tommaso was placed at ninth place in the top ten of the most popular names in the country. And the trend continues to accentuate compared to previous years: in 1999 just over 2000 children were called Tommaso, while in 2022 this number rose to 4179.

Personality of a child named Thomas

For Thomas the family it is the most important value, behind its mysterious air it hides a great sensitivity and a need for love and protection that only the family can satisfy. You have a reserved nature and prefer to wait and get to know your interlocutor before opening up to others.

Thomas loves take care of himself and of his body, he is a sportsman and loves to socialize also through sporting activity, however he takes the right time to evaluate who he is in front of and does not like noise, crowd and chaos. He has a great sense of humor: he likes to laugh and make people laugh. He is stubborn and proud, he doesn't want to be dominated and he is courageous and determined.

It's a man pragmatic, realistic and rational, he is not easily influenced or impressed: in practice, just like St. Thomas, he only believes in what he sees.

love the competition, he always wants to be the best in what he does and spares no energy and effort to stay in first place.

What profession will Thomas make? He certainly doesn't want to take orders from anyone and doesn't want to be responsible for others, so freelancing is perfect for him. He is an intellectual and he will love to devote himself to professions of a scientific, technical, medical nature.

The character of Thomas is governed by the sign of Cancer, in constant search of material and emotional security. Generous and sensitive.

Il blu it is the color of Thomas, a symbol of wisdom, loyalty and truth which also highlights his constant search for serenity.

Lo sapphire it is Tommaso's birthstone, a symbol of his purity and elegance.

Thomas's lucky number is 4: it stimulates the achievement of one's goals.

Thomas! is a 1993 live album by the singer Marcella Bella dedicated to the newborn son (who also appears on the cover) which collects some of his great successes.

But Tommy is also the title of a very famous album by the rock group Who, from which a film with Kurt Russel was also made.

add a comment of Name for child: Tommaso. Origins, meaning and curiosities