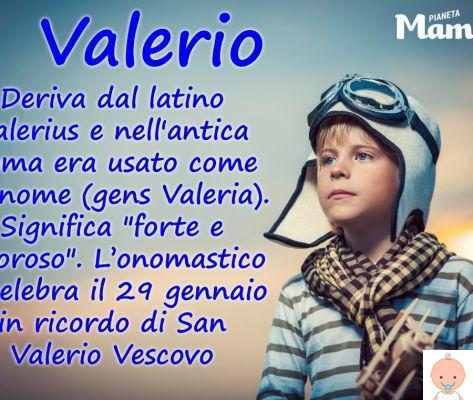 Valerio it's a name for child of ancient and noble roots. If you are expecting a boy and Valerio is included in the list of favorite male names, come and discover the origins, the meaning, the curiosities about this name and the personality of Valerio.

Origins and etymology of the name Valerio

The name Valerio derives from the Latin nomen Valerius of the gens Valeria. The origin is to be found in the verb Valere, which means "to be strong" "to be vigorous", "to be healthy".

Meaning of the name Valerio

The Latin meaning of the name Valerio refers tobe healthy, strong, robust, vigorous. So it is also a good auspicious name for a baby.

Diffusion of the name Valerio

The name Valerio is obviously very old, but nowadays it is more widespread in Tuscany, Lazio and in the northern regions than in the southern ones.

Currently there are about 48780 people called Valerio In el Paese and the name ranks 248th in the ranking of the most common names.

Personality of a child named Valerio

Valerio is curious, emotional and often hyperactive. Nothing stops him: he is enterprising, confident and authoritarian. Sometimes he can be irritating to her air of superiority about him. He can easily get angry, this is because he is a perfectionist, demanding.

E' smart and brilliant, sometimes capricious, certainly fascinating and seductive for his instability in love. He is a man who is striking for his natural authority, his reserved and sober ways, but also for the energy that his personality emanates from him. He is optimistic, enthusiastic, full of vitality, even if at times he tends to introversion and isolation.

It can give in to impulsiveness, but it always gives the group great vitality and energia, spirit of action and resourcefulness. He is proud and creative independent. He is a curious child, he always asks many questions, he has a continuous and insatiable thirst for knowledge, can laugh, be smart, eclectic, but also reserved, thoughtful and composed: a multi-faceted personality that fascinates precisely for its versatility and complexity.

He is a sociable and friendly person, can show an inexhaustible interest in someone or something that interests him and complete indifference to what does not worry him. He likes to seduce and persuade, and if he wants it he really does. He will be looking for an intelligent, refined and seductive companion.

What profession will Valerio make? He will stand out in every field thanks to the way in which he will carry out his work: he will probably be interested in new technologies, fashion, creativity, writing. He will be a freelancer or he will hold a leadership role within a company.

The zodiac sign that best represents Valerio is the Sagittarius, with an always very active mind and a personality full of contradictions.

The color associated with the name Valerio is blu, connected to deep feelings, to the great ability to find one's inner balance, while undertaking a continuous struggle between changes and conflicting feelings. Blue, therefore, is the symbol of a sort of ambition, a state of balance and inner peace to which Valerio aspires.

The precious stone of Valerio is sapphire, the blue stone par excellence, linked to the idea of ​​learning, mental acuity, psychic energy and continuous spiritual research.

The number associated with Valerio is the two, which refers to the idea of ​​duality and the union of two elements, sometimes different and contrasting, which manage to find their perfect union. Indecision and commitment in the constant search for perfect balance characterize the person associated with the two.

A 1974 song by Richard and Linda Thompson. The text tells of the tightrope walker, the great Valerio, who challenges the unknown, the emptiness and tests his courage while the crowd looks at him with a mixture of fear and envy.

add a comment of Name for child: Valerio. Origins, meaning and curiosities