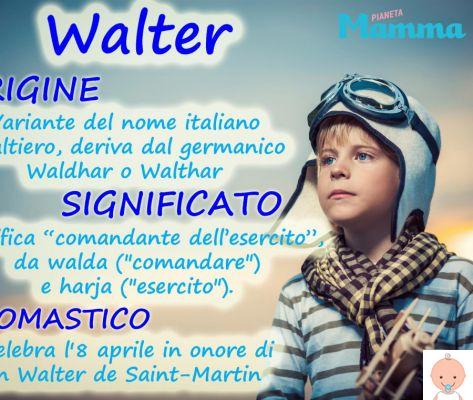 Variant of the name el paeseno, with a decidedly more classic flavor, Gualtiero, Walter it's a name for child particular that can be the right compromise for those parents who wish to opt for a less common but still original male name.

Origins and etymology of the name Walter

The name Walter comes from several forms of a single Germanic name (Waldhar, Walthari, Walthar). It is composed of the roots walda ("command", "powerful") and harja ("army"). As we said, Walter is above all a variant of the name el village Gualtiero.

Meaning of the name Walter

Given its Germanic origin, the meaning of the name Walter can be "commander of the army".

Spread of the name Walter

The name is not particularly popular. At the beginning the only name present in the town was Gualtiero, its variant Walter began to meet particular success only thanks to the great popularity of the Scotsman Sir Walter Scott, author, among others, of the Ivanhoe.

Personality of a child named Walter

Walter has a reserved personality and intimist, reserved and at times it can even appear confused.

Seemingly independent, he doesn't really like to live alone and needs to rely on someone, especially on an emotional level. The home and family are therefore very important to him and he will work deeply and with all his strength to find balance and harmony. He loves comfort and having someone to take care of him.

However its apparent confidentiality and calm can hide a troubled and impetuous aspect that emerges especially when he is confronted with a certain degree of dissatisfaction. He has an innate sense of fairness and justice that drives him to find the right compromise for everyone.

As a child Walter, because of his lonely nature, could easily feel misunderstood and sometimes lonely. He will be driven to want to learn and deepen to be able to find the answers to the existential questions that often arises. Walter is a idealist: needs to be loved and appreciated. The more he feels surrounded by love and affection, harmony and serenity, the more he will be able to give the best of himself.

What profession will Walter make? His main ambition is not only economic independence: he loves to do as he wants and when he wants, free profession will probably be his preferential choice. Very specialized professions (such as technician or engineer) will be a great choice.

The zodiac sign that best expresses Walter's characteristics and personality is the Sagittarius: far-sighted, idealistic, capable of great adventures.

Walter's color is theOrange, which refers to the idea of ​​balance, wisdom and inner harmony.

Walter's lucky charm is theamethyst, linked to the idea of ​​balance and harmony both inside and towards the rest of the world.

Walter's number is 6 which expresses his deep inner desire to have a stable and loving family, and his need to work in harmony with others and to be appreciated.

"Walter the Magician" is a song written by Luciano Ligabue contained in the 1993 album Survivors and Survivors.

Names of the most popular royals: the 10 most beautiful to draw inspiration from ❯

add a comment of Name for child: Walter. Origins, meaning and curiosities