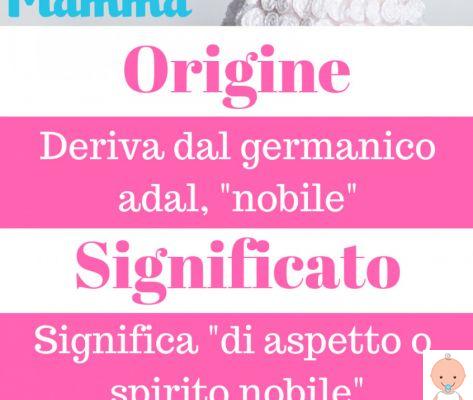 Adele is a feminine name of Germanic origin that is particularly appreciated, especially in France and Continental Europe, but which also has some success in the country. We discover in this guide the origin, the meaning, the curiosities of this name for baby girl.

Adele celebrates the name day on 24th December when the Church remembers Saint Adela of Pfalzel, founder and first abbess of the Benedictine monastery of Pfalzel, near Trier around 690. According to tradition, Adele was the daughter of the Merovingian king Dagobert II and the Anglo-Saxon princess Matilda

Origins and etymology of the name Adele

The name Adele finds its root in the Germanic adal, "noble", and is, therefore, a name related to Ethel. It was originally the truncated form of longer names that contained it, such as Adelaide or Adelasia.

Meaning of the name Adele

The Germanic word Adal means noble, so Adele can mean "of noble appearance", but it can also refer to the nobility of mind and therefore"of noble spirit".

Spread of the name Adele

Particularly widespread in Lombardy and in the northern country, the name Adele it was introduced in Great Britain by the Normans but then fell somewhat into disuse after the Middle Ages. In the nineteenth century he was once again lucky, even in the country, in his la French form Adèle, which was imported without the accent. In the village, the name Adele is enjoying a moment of great fortune. According to the ISTAT dataIn fact, in 1999 only 216 little girls were called Adele, while starting from 2022 an increasing number of new parents preferred Adele to baptize their children, to the point that, in 2022, 1582 little girls were called Adele.

Adele is a person susceptible, emotional, idealistic, which often tends to withdraw when faced with difficulties or hostility. At the same time, however, she also knows how to be Adele courageous, determined and bold when it comes to defending his position. In other words, in Adele's personality coexist shyness and a surprising and unexpected extroversion when it comes to socializing and showing affection, as well as fragility and courage.

These very different aspects of Adele's character make her a person original, always with avant-garde thoughts, and extremely idealistic. But precisely her excessive idealism, in fact, risks making her passive and dependent on others: sometimes for fear of obstacles or problems, Adele tends to take refuge in the safe and comfortable environment of her family and to appear fragile and scared.

Adele is drawn to all that is original and avant-garde and she likes to be different from others, but sometimes this trend can translate into an unwanted social marginalization that can make her suffer.

What profession will Adele make? At work she is very curious and this curiosity leads her to always have new ideas that push her to invest in her work, however this profusion of ideas and projects can make her unable to finish what she started. Adele will be particularly attracted to the professions in the world of travel, digital technologies and also those in social sphere.

Adele's personality traits resemble those born under the sign of Capricorn: fragile, but capable of fighting hard and, at the same time, dreamy and idealistic.

Adele's color is black, a tint that can reveal many subtleties and details of his complex personality.

Il garnet it is Adele's stone, above all thanks to its properties capable of treating depression and melancholy, two things to which Adele is particularly vulnerable due to her tendency to introversion.

Il 9 it is the number of idealism, perfect for Adele because it also refers to her emotional nature and devotion to her loved ones.

With the love you give me, there is nothing I cannot adore

The way I run, with you, honey, is we can break any law

There is something in your love that breaks down my walls

I'm moving on for you

You will be eternally

the only man I belong to

My whole life has been frozen

The sweetest devotion I have ever known

In the album 25, the famous singer Adele entered this Sweetest Devotion, dedicated to his son

add a comment of Name for girl: Adele. Origins, meaning and curiosities