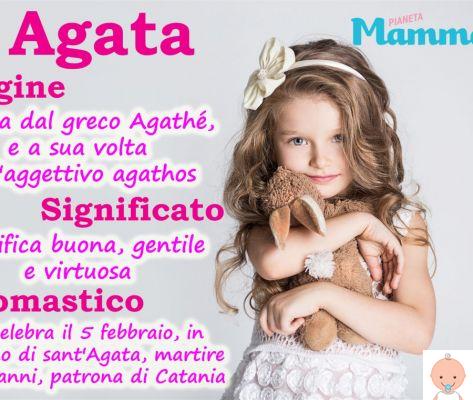 Agata is a name for a girl of ancient Greek origin which has had a very wide diffusion from the Middle Ages onwards also thanks to the cult of Saint Agatha, a girl from Catania who was martyred under Decius.


We discover in this guide the origin, the meaning, the curiosities of this name for baby girl.

Although there are numerous saints and blessed who are called Agata in reality the name day is celebrated on 5 February in memory of Saint Agatha, a martyr at 13, patroness of Catania and many other places, who
miraculously stopped the eruption of the volcano thus saving the entire population.

Origins and etymology of the name Agata

The name Agata derives from the Greek term Ἀγαθὴ, Agathe, which originates from agathos which means good, kind. In the country language the name also coincides with agate, referring to Precious stone, which however originates in the Greek name ἀχάτης (akhátēs) and therefore the two terms are not related.

Meaning of the name Agata

Il meaning of the Greek word agathos, in which the name Agata has its roots, can be:

Diffusion of the name Agata

La diffusion of the name Agata grew exponentially thanks to the cult of sant'Agata which spread mainly in the Middle Ages in Sicily and then crossed the borders of the island to land throughout Europe.

In the town the name is particularly widespread especially in Sicily: according to the data ISTATHowever, its popularity has been increasing in recent years even if it remains a little used name: in 1999 it was chosen only by 116 new parents el paeseni while the number rose to 469 in 2022.

Agata is a woman active who does not like to be idle and is always ready to face new challenges. She is a serious person who keeps her commitments and hardly promises what she cannot deliver. She stands out for her honesty and sincerity and is generous: she does not hesitate to lend a hand to those in need.

It is often too much impulsive: often risks jumping to hasty conclusions and making hasty judgments. AND' stubborn and does not hesitate to remain firm on its positions regardless of the consequences that derive from this behavior. It is certainly a lot self-confident and when something starts it stops only when it has reached the goal or finished its task.

Agate does not like changes very much, she is fond of her habits and finds her happiness in the routine which is so precious that it does not allow anyone to disturb her peace.

She does not like waste money however, he loves luxury and is committed to accumulating money that he also knows how to manage in a rational and balanced way.

He loves travel and has a real passion for nature and animals, and never misses an opportunity to discover new places. The environment surrounded by greenery relaxes it and eliminates stress and restlessness.

Il Bull it is the astral sign that is best associated with Agata's character traits. Those born under this sign are known to be tireless workers who only stop when they reach their goals. They are also caring and protective of their loved ones.

Il green it is the color associated with Agata, the dominant color of nature and also reflects idleness and travel. It is a refreshing soothing, relaxing tint and is linked to the idea of ​​luck and hope.

Lo Emerald it is Agata's birthstone. It symbolizes rebirth, love and eternal youth, plus its green color reflects spring and nature.

Agata's lucky number is 6, which outlines the achievement of a goal, a goal and represents fulfillment and unity, even family.

"Agata" is the title of a historic song by Nino Ferrer, also sung together with Nino Taranto

add a comment of Name for girl: Agata. Origins, meaning and curiosities